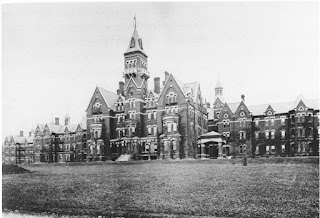 
Sadly, dignified and effective treatment for the mentally ill hasn’t always been the American standard. In fact, many insane asylums were notorious for subjecting patients to procedures that would today be considered sketchy and unethical, at best. All things considered, it’s understandable that old asylums in general often come attached to rumors that they’re haunted or otherwise unsettling.


However, some asylums have earned a higher degree of notoriety than others, and with good reason. The following are just a few of the many that make a hypothetical stay at American Horror Story: Asylum’s Briarcliff Manor sound like a walk in the park.


The situation that eventually developed within the walls of the Trans-Allegheny Lunatic Asylum started out as a result of drastic overcrowding. It was originally built to house a hard maximum of 250 patients. However, by the year 1949, there were well over 2000 patients living there, instead.


An eventual investigation conducted by The Charleston Gazette uncovered absolutely abominable conditions. Among the horrors discovered were extreme neglect in regards to hundreds of the patients, patients locked in cages, and procedures like lobotomies being performed with such inappropriate tools as ice picks. Unsurprisingly, the Trans-Allegheny saw tens of thousands of deaths before it finally closed in the 1990s. However, thrill seekers can still visit and even stay overnight if they are so inclined.


Topeka State Hospital is just one of the many hospitals that saw patients being subjected to unspeakable cruelty with the intent to “cure” them of their ailments. However, there was a lot of abuse that went on there, as well. Many patients were raped and otherwise physically abused. Some were left permanently restrained with leather straps to the point where their skin began to grow over the restraints themselves.


The staff at this hospital was especially notorious for castrating a high number of the patients under care there. It started just after state law greenlit castration as an acceptable treatment for the hopelessly or criminally insane in 1931 – to the tune of 54 castrations. This is especially troubling when you consider the fact that quite of few of the hospital’s patients came attached to unknown identities and conditions.


Greystone started out with the intention to provide the mentally ill with a proper sanctuary and truly therapeutic treatment. However, it wasn’t long before overcrowding became a massive issue, as it was for many asylums. Greystone was built to house up to 1600 people, but at one point housed closer to 2500, instead.


What’s more, Greystone is another asylum that chose to implement sketchy, controversial treatment options in the past to treat multiple illnesses. Examples include but are not limited to electroshock therapy for the treatment of PTSD, insulin shock therapy, and more. The hospital is also connected to many stories of rape, mysterious death, suicide, and even the escape of a rapist.


Greystone is still in operation today, although the notorious practices are no longer in use there. Also, the state of New Jersey is currently planning to replace it with a smaller facility.


Today, the building that was once home to Bloomingdale Insane Asylum is Columbia University’s Buell Hall. However, it was once used to house (and rehabilitate) mentally ill patients of all types.


As you might guess, there were some unsavory practices at work, many of which were officially exposed by a journalist named Julius Chambers in the late 19th century. (He had himself committed to Bloomingdale for ten days.) Among other things, Chambers talked of patients being choked, kicked, hit, and otherwise abused until they bled freely. He also spoke of patients being driven to suicide (or close to it) by the sheer cruelty on the part of the staff.


Thankfully, his work yielded positive results. Not only were twelve of Bloomingdale’s patients released (as they were not insane), but the book he wrote about his experiences – A Mad World and Its People – paved the way for badly needed reforms as far as how the mentally ill are treated in America.


In operation from 1907 all the way to 1987, Byberry was described as containing wards reminiscent of Nazi concentration camps by one Charlie Lord, a former staff member at the hospital. Lord eventually took it upon himself to expose the conditions there with 36 grayscale photographs – images that would eventually be published by Life in 1946.


Among the circumstances documented by the photos were filthy living conditions that found many patients sleeping in their own bodily waste. Hundreds were allowed to roam the halls of the facility completely naked. Thankfully, this exposure led to not only the eventual closure of the facility, but also far-reaching reform as far as the conditions associated with mental health facilities.


Danvers State Hospital is one of the many defunct mental institutions rumored to be heavily haunted by malicious spirits, and it’s not hard to understand why. To begin with, it was built on the very grounds that saw the notorious Salem Witch Trials centuries ago. It was also a place that saw unspeakable acts of human cruelty committed.


Patients were confined using straitjackets and uncomfortable leather restraints. They were also subjected to treatments considered today to be cruel and inhumane, including but not limited to lobotomies and electroshock therapy. The hospital was even used to shoot a horror film dealing with demonic infestation in asylums – Session 9.


At first glance, the building known as Overbrook Insane Asylum appears to be a beautiful, house-like building. However, like many notorious asylums, it saw untold horrors being committed within its walls.


To begin with, the patients were neglected to a horrifying extent. The year 1917 saw a total of 24 patients being allowed to freeze to death in their beds. The small facility also would become dangerously overcrowded after World War II and see nearly 150 patients go missing. Overbrook is another asylum said to be very haunted today. It was used as the set for the screen adaptation for Chuck Palahniuk’s Choke.