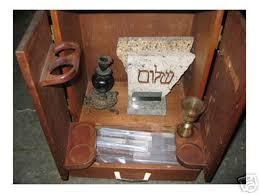 I love internet tales of Horror.  My favorite is The Hand that Resists Him http://ghoststoriesandhauntedplaces.blogspot.com/2012/05/haunted-ebay-painting.html but the Dybbuk Box is a close second.   The Dybbuk Box was first discovered my a man named Kevin Mannis.  Mannis purchased what is now known as the Dybbuk Box at an estate sale in 2001. It used to be the property of a Holocaust survivor who escaped and moved to the US.  The survivor's name was Havela and she was supposed to have put the Dybbuk into the box after her friends helped her with a séance.

A Dybbuk is a spirit from Jewish folklore.  It is an angry spirit that is able to possess the living.  When Mannis opened the box, he found 2 pennies, a lock of blonde hair, a lock of brown hair, and a small statue engraved with the word Shalom inside the box.  It also contained a wine goblet, a dried rose, and a candle holder wit octopus legs.   These items are all used in the Jewish exorcism ritual.  According to Manis, he gave the box to his mother as a birthday present.  She had a stroke that very day. Manis had many other problems with the box and he finally decided to list the box on Ebay.  The listing included the following statement:

Other owners say the box smells like urine and is accompanied by nightmares about an old hag.  Horrible tales were carried with the box as it leapt from one owner to the next. Iosif Neitske was the last owner that auctioned the box on Ebay.  He claims that the box caused electronic failure, insect swarms and medical problems.  Medical problems included hives, vomiting blood, and hair loss.  Neitske tried to sell the box on Ebay.

An article in the Los Angeles Times talks about this famous Ebay box:

"A small wooden cabinet went up for auction on EBA.  Inside were two locks of hair, one granite slab, one dried rosebud, one goblet, two wheat pennies, one candlestick and on allegedly, "dibbuk", a kind of spirit popular in Yiddish folklore.

The seller, a Missouri college student name Iosif Nietske, described the container as a "haunted Jewish wine cabinet box" that had plagued several owners with rotten luck and a pate of bizarre paranormal stunts"

The story of this strange box was the basis for last summer's movie "The Possession".   You can read more about this box and its story at http://dibbukbox.com/story.htm
Email Post
Labels: Dybbuk Dybbuk Box Ebay Box Ebay Ghosts Ghost Box Haunted Ebay Haunted Ebay Box

Julie Ferguson said…
I just watched Haunted History about this very box and all the stuff that happened to all the owners. What a creepy box.
August 12, 2013 at 12:41 PM