The Conjuring and the True Story of the Annabelle the Doll 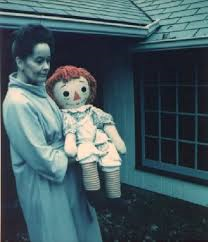 I watched the Conjuring last night.  I really enjoyed the movie.  The Warrens and their work have always fascinated me and I've written about them before on this blog.   The movie was primarily about the work they did with the Perron family.  They aided in ridding the Perron house in Rhode Island of the ghost of a witch name Bathsheba.   However, the movie begins with Annabelle the Doll.  I have written about Annabelle a couple of times before and although I loved to see her story in the movie, it wasn't completely accurate.   First of all, the movie doll was a creepy glass doll and the real Annabelle was just a Raggedy Ann doll.   Here is the real story of Annabelle

Annabelle was a gift given to a young nurse named Donna by her mother. It wasn't long after Annabelle was given to Donna that Donna began to notice Annabelle moved about the apartment on her own. Donna and her roommate, Angie, began to notice that they would leave for work and when they came home the doll would be laying on the bed in a different position. The women started arranging the doll purposely in one position and they would find it with its arms crossed or legs moved. This went on for some time and after a while the doll became more active. It would change rooms. Once, they even found the doll kneeling. This is a position that is impossible for a raggedy anne doll on its own.

After this, a priest was called in to do an exorcism. The exorcism seemed to work and the Warren's offered to take Annabelle home with them. On the way home, Annabelle caused the car to veer off the road almost killing the Warrens. The Warrens dosed the doll in Holly Water and the activity stopped for a time. Soon after, Annabelle began to be active in the Warrens' home and they had to move her to their Occult Museum in Monroe, Connecticut. They keep a website that documents their experiences with Annabelle at http://www.edandlorrainwarren.com/. The doll has remained active since its placement in the museum and is even thought to be responsible for some deaths since that time.  Below you'll see the real Annabelle as compared to the demented looking doll they used in the movie. 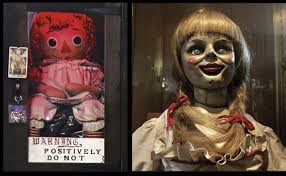 magikalseasons said…
Can't wait to see the movie! Not a fan of dolls really. I have a lot of them I inherited slowly going to find them new homes. :)
August 9, 2013 at 1:00 PM

Anonymous said…
Here's a great little article on the Warrens from 1975...

ps Checkout Freaky Folk Tales - a collection of macabre, supernatural and amusing tales, from the haunting of ancestral homes to the malignancy of inanimate objects. It also features rare illustrations and artwork inspired by the Victorian era.

Unknown said…
I had a haunted doll in my house. It didn't look as creepy as that one but, it was scary none the less. I called on a very good local paranormal team http://www.parascientificdiscovery.com to help me. They eventually got rid of the doll for me and things have been good since then.
September 9, 2013 at 10:27 AM