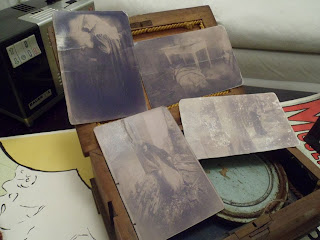 My sister found this footage for me and brought it to my attention.  I've heard many rumors about it.  Initially, people were saying it was an attempt at viral marketing for the movie "The Possession" but that movie has been out for a year now and was based on the Dibbuk Box I wrote about yesterday.  I've also heard that it was marketing for another movie called "The Lords of Salem" but that movie doesn't seem to fit the bill either.  The footage has been floating around for a while and no one seems to really know the story behind it.  The consensus is that it is a hoax or marketing but for what?  I thought the footing was haunting and creepy enough to merit a post here.  It certainly got my attention and I would love to hear the real story behind it.  I think I would also watch whatever movie this might be marketing for.   Here is the footage and the story that came with it.

My name is Chad. I'm a student at a university in New York.
I just moved to a studio apartment and needed some furniture.
I found a guy on Craigslist that wanted to desperately get
rid of his things at super cheap prices so I went to check it out.
He sold things in bulk to get rid of as much things as possible.
I bought a small table and it came with a bunch of other random things.
Some of it I gave away and some I kept.

An old wooden box caught my attention. It was locked and out
of curiosity, I kept it. I had to force open the lid with a screw-driver
and inside I found some old pictures. The word 'bitterroot'
was handwritten on the backs of all of them. There was also a tin can that
contained a reel of film that I later learned from my
friend Dario (a film student), was 8mm film.

The film was pretty damaged so I just kept it on my bookshelf
as decoration, but I couldn't get the images of the pictures out of my head.
I had to figure out a way to watch that film.

With help from Dario, we got an old 8mm projector in good
working condition on Ebay. The film skipped in several spots so
we put it together with a special tape and then watched it again.
What we found was disturbing.

If you want to look at the actual website you can find it at:   http://thebitterrootfootage.com/
Email Post
Labels: The Bitterroot Footage Urban Legends

Anonymous said…
Hi and thank you for posting. I believe this is a marketing film for an upcoming project or a hoax. Perhaps, its the project itself, such as a film student in college or high school. The sound does not jive with the film (I'm not even sure sound was available.... I grew up with this type of film..no sound.)Digital video can be made to look very old through special effects. Let's think of this in the decades of when this film was available (possibly 50's through 60's). Cameras were expensive...people did not go around trying to catch footage of paranormal activity, as they today. None of this adds up as real. Why didn't the "old crone" go after the person filming in the house? Too many holes. Reminds me of Blair Witch. Would be interested to see what comes next!
August 12, 2013 at 7:47 AM