A Ghost Tour of Haunted Ebay

I find the number of creepy ghost stories that seem to slither their way off of  Ebay fascinating.   Items that have horrible histories and terribly haunting stories are common place on Ebay.  Check my story below "The Dibbuk Box" for a peek into one of my favorites.  A few of these haunted Ebay item stories have gone viral and spread. However, there are literally thousands more of these haunted items on Ebay that seem to go entirely unnoticed. The majority of these items are dolls, but there are other interesting items in the mix.  Many of these items have compelling back stories and interesting histories.  I'm going assume most of the haunted items on Ebay are Hokum, but the creativity that goes into these stories are worth noting.  It is also just interesting to explore haunted Ebay. 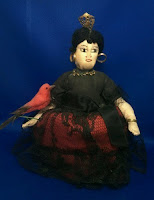 Haunted Doll Puppet Savannah:  Ebay Item #:  121154390486  Price$15.49
This is a very old haunted doll puppet named Savannah, I purchased her along with a few other items from a witch estate Salem Ma. on my last trip there a week and a half ago. This doll is beautiful I have never seen another like her, she is amazing, I love the little bird on her hand, and the black and red lace dress that she is wearing, when I purchased her the lady who sold me her, said that there is a soul of a woman attached to this doll vessel, and that she was very wealthy, she married into it, she met her husband at a convention, she was a waitress there, she was serving that night when he set eyes on her, she was breath taking, he fell in love with her at first site, he approached her and introduced himself, but she was of course intimidated by his hefty wallet, so she turned his offer of exchanging numbers down that night, but he was persistent, he found out where she lived, and he located her, a few weeks later, she was stunned by the effort that he made to find her, so when he asked her out she excepted, they dated a few months and by then she had also fell for him, so they married shortly after, they had a happy marriage, until one day all that changed, her husbands company began to seep down hill, and he became agitated, he turned into a man that she did not recognize, all they did was fight and argue about the littlest things, soon they felt like strangers, they began to thrift apart, the love that they once had for each other, was like a light in the farthest distance of the ocean, that neither one could grasp, soon the light had vanished completely, and there was no turning back, Savannah began to find comfort in a new love interest of hers, he was the grounds keeper, they began to form a love for each other, because when she was down about her husband, he was the shoulder that she cried on, they would sneak off together into the fields and make passionate love, soon the other staff began to talk, soon the whole town was talking, and sure enough the news had gotten back to her husband, who felt that he was not finished with the marriage, he wanted answers, she told him that it was just rumors, and that they were just friends, later that night while her husband was asleep she slowly slipped off the bed, and exited down the corridor, she had to see her love to assure him, that her heart was always with him, and that she had to lie because she did not want to cause trouble for him, because she loves him dearly, she found him sleeping in his room, she told him how she felt, and he said that he knew, he can feel their love for each other, and that they should leave together, they planned that the next morning they will leave and never return, they kissed goodbye and parted ways, Savannah was unaware that her husband had followed her and was listening to her sneaky plan, the next morning she woke and her husband was by her bedside, he was very polite and generous, he rubbed her feet and shoulders, and kissed her passionately, she pushed him away, she told him that she was upset that he accused her like he did, and that he should have never done that, he apologized, room service brought in breakfast, he told her to wash up, because they will be having breakfast in bed today, she was stunned and figured that he was trying to butter her up, so she went to freshen up, after breakfast she felt ill, her stomach began to cramp, she said I do not feel well, and she lied down, about 20mins later she was dead, her husband had poisoned her, later her lover saw all of the commotion and did not know what was going on, then he saw them taking out a body bag, he was still confused, he looked and looked around to try to figure who it could have been in the bag, then he overheard a lady speaking to her husband, asking if he had any idea of what may have happened to Savannah, and this is when he fell to his knees, screaming noooooo!!!! nooooo!!!! why? why? not Savannah! NOOOOO!!! everyone was starring at him, some staff even had tears in their eyes, because they knew how much he loved her, and her husband stood there with a smile on his face, later they found out that her husband did it, and he received the death penalty, but her poor love, never married, or had children, he died a lonely man, waiting for his lost love. Savannah became attached to this vessel, because it was a gift from him to her, he gave it to her on her 29th birthday, it reminded him of her because she loved to wear red, and black, they were her favorite colors, and she had a pet bird that was similar to this one, Savannah is a loving spirit she is great to enhance your relationship, she helps things work out for the best, she is a blessing and she will make an excellent addition to any haunted doll collection, she is a puppet and she does not have any legs, she is very unique anyone who owns her will be very lucky, thanks for reading, blessings, love, and light... 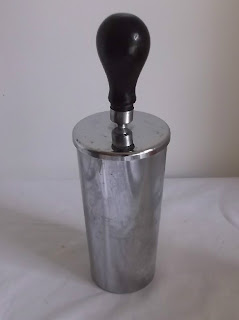 This item is from the estate collection of my friend Maggie, a respected medium. She collected highly unusual items for most of her life. Please read below the description for information on the estate that this item hails from. The description relates to you what was related to me and my own experience, if any with the item. I make no claims that you will have the same or any experience with this unique vintage barware item. I am not auctioning off anything other than a vintage ice crusher.

This is a rare vintage cocktail ice crusher from the 1930's. Stainless steel (very rare in the 1930's) with a wood handle and razor sharp crushing blade things! Wicked looking for sure, but will not bring any wickedness to your home. Quite the opposite! Maggie acquired this old piece from the grand daughter of the original owner, Charlie. Charlie lived a good life, was a good man, but passed at the early age of 54 back in 1959. Charlie was a heavy drinker all of his life and struggled with it. On the mornings after, Charlie would get out this ice crusher and make a homemade hangover concoction - crushing ice, tomato juice and other stuff in this stainless cup. The ONLY time he used it was on these mornings. After Charile left this earth, his wife could hardly stand the sight of this ice crusher but could not bring herself to get rid of it. It was a prized possession of her late husband, who would often talk about the quality of stainless steel. To her...it was a memory of the alcoholism that killed him. Eventually the item passed on to Charlies daughter. The family felt his presence in the home and attributed it to the ice crusher. They experienced the sound of tinkling ice in glass, laughter, footsteps, knocking and doors opening/closing. Pranks.The item was finally given to Maggie as the disruptions became too much for a new family. My personal experience, and again, this may not be yours, but here at my house, my dogs have loved having a new playmate around. I think Charile loved dogs. I have heard him romping around with mine! It is a unique vintage item to add to a collection. 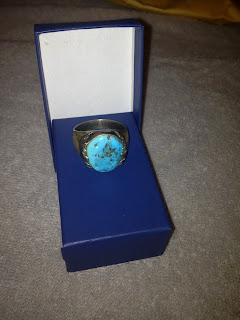 Haunted Jewelry
Ebay Item #:  111140201376  Price$89.99
This Ring is to powerful to even have in anyone's possession, but the witches cajinn the ring is known to contact the dead and let them thru and bring evil to your enemies you wish upon VERY DANGEROUS if you dont know what your doing! If you are not certified in witchcraft please don't purchase this ring something can go wrong and you have NO control over what is brought thru BUY AT YOUR OWN RISK!

Ebay Item #: 261262194754  Price$30.00
This antique pitcher would be beautiful if someone is willing to put some elbow grease into it and polish off the decades of tarnish. If you look at the 2nd photo, you can see I polished a section of it. I did not finish because as soon as I started, the activity began. I got my hair pulled, the phone rang with no one on the other end and there was a strong, strong scent of almonds. Too much for me. I am still very uneasy having all these "visitors". Maggies notes on this item say - "Jules. Found hidden in coal bin, 1947 - Denver, Co. Katherine. Homicide. Eternally pissed off (her words, not mine :) ) likes attention." So there you have it. Very old William Rogers. Engraved on bottom. I cannot make out the numbers. As I said - this could be a beautiful antique piece with a little TLC. Large - 9 inches high and 7 from handle to spout.
Email Post

Wirral Writer said…
As a published paranormal author of Kindle books on Amazon, I found your article utterly fascinating! I never realised ebay had so many haunted items.!
September 25, 2013 at 5:19 PM