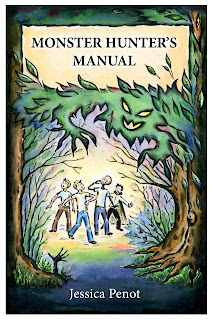 The Monster Hunter's Manual is the story of Gabriel.  Gabriel is a boy who has just lost everything.  His parents have died and he's forced to move to a strange county, France, to find a new home.  He dislikes his crazy aunt, who he has to live with, he doesn't want to learn French, and to make matters worse, the only real family he has left is his whinny, baby brother.  Despite all this, as soon as Gabriel enters his aunt's ancient castle, he realizes that all these disasters might be the beginning of a grand adventure.  In the castle of Chateau Larcher, the walls groan and the attic talks.  Shadows take on strange shapes and Gabriel becomes convinced the castle is haunted.  But the ghosts in Chateau Larcher aren't what Gabriel expects and he soon learns that skeletons aren't always scary and ghosts can tell the most interesting stories.  Even Aunt Perrine can end up being the most powerful monster hunter in the world.

The Monster Hunter's Manual is my first children's book and the first in a series of books which will chronicle the adventures of Gabriel and Alex.  Hopefully, it will be coming out soon.

The Moonlit Stitch said…
Please keep us posted! This sounds WONDERFUL! I grew up devouring books just like this and sometimes prefer them even as an adult. Exciting! ~*~Lisa
July 5, 2013 at 6:47 PM

Julie Ferguson said…
Congrats on venturing out into children's books. I have thought about writing one myself. I like the cover. I fits the title well.
July 8, 2013 at 12:51 PM