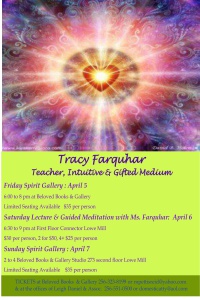 Whenever I imagine a medium at work, I think of the mediums of the Spiritualist Movement of the turn of the 20th century.  I imagine women and men sitting at old wooden tables talking to the dead.  I also view mediums with skepticism.  I tend to think that in any money making venture there's always an angle and sometimes people stretch the truth for the profit.  I guess I am saying that I think most mediums are full of it and I've never seen a medium that's made me believe otherwise.

Last night however,  I joined medium, Tracy Farquhar, for a spirit gallery at the Lowe Mill and she managed to change my mind.  The Lowe Mill is an old Mill in a minor state of decay.  It has been revamped and turned into an art center.  There are concerts there and many artists have studio space in the Flying Monkey portion of the Lowe Mill.  Beloved Books is in a corner of the Flying Monkey and is one of those last corners of the world that still pays tribute to the written word in the form of purely paper books.  There are no kindles or nooks there.  There are only shelves of old books surrounded by paintings and chairs.

The Spirit Gallery was in Beloved Books and music from the concert below made the floor boards vibrate as the medium spoke.  Dogs barked in the distance and the sound of frolicking people surrounded the darkened book store.   Tracy Farquhar paced in the dark and  said that there were many spirits in the store with us.   She didn't ask any questions.  She just called out a name.  She said there was a Robert or Roger with us  and he was someone's uncle.  She said he died 5 years ago from something having to do with his brain.  She said she saw an old family house by the lake.  She said  Robert/Roger liked fishing.  It was at this point that I admitted that I did have an Uncle Roger who passed five years ago.  He wasn't my favorite uncle so I wasn't overjoyed to talk with him again, but I was intrigued by the accuracy of what she was saying.  She said the family house had just changed hands and that although it was still in the family it wasn't with us anymore.   The house was crumbling.  The foundation was sinking.  There was an old tree in the yard that Roger had buried something he valued by when he was a boy.   Roger saw me as a girl.  I was a little girl to him and he wanted me to remember him taking me someplace.  He also felt bad about some falling out he had with my father.  I thought she was talking about my biological father who had divorced my mother so they didn't talk anymore.  He also said he was worried about a girl, whom the psychic called my daughter.  I told her I didn't have a daughter.  She said it was a young girl who was or had been in school but was leaving because of social problems.  He wanted her to go back to school.  My sister did just drop out of college last semester because of problems with social anxiety, although I didn't tell the medium that.  I tried not to tell the medium much.  She continued to say I had some kind of foot or heal pain and he said I should take care of that. I do have plantar fasciitis and I hate taking care of it because that involves wearing ugly shoes, my nemesis.

The medium moved on to another spirit and I was left vaguely stunned and trying to figure out how she could have possibly guessed all of that information.  I still can't think of a way,  I am assuming that she did somehow reach the spirit of my Uncle Roger.  I later learned that my step-father and my Uncle Roger had a huge falling out right before he died and that my Uncle had a favorite tree by our old family house where he built a fort and buried his treasures.  The psychic had known things I didn't even know.

The Spirit Gallery ended in many tears and people being reunited with long lost loved ones.  Lots of people were crying.  I was just stunned.  I guess if I believe in ghosts it isn't that much of a stretch to believe in a medium, especially in one who knew more about my family than I do.
Email Post
Labels: Mediums Psychics Spirit Galleries Spiritualism

The Moonlit Stitch said…
This is not just a physical world, but a spiritual world. I have had 2 messages from relatives in the past year during quiet times and both were right. Here is a story you might enjoy Jessica: http://www.nashvillemusicguide.com/growing-up-kilgore-the-johnny-horton-story/ ~*~Lisa
April 6, 2013 at 4:41 PM