The Horrific and Beautiful Franklin Castle 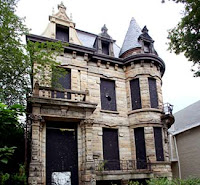 The Franklin Castle is a house surrounded by sorrow.   Franklin Castle was built in 1865 by Hannes Tiedemann, a German immigrant.  It is located in Cleveland, Ohio and is believed by many to be the most haunted house in Ohio.  Whether or not it is the most haunted house in Ohio, it is certainly one of the most tragic.   Tiedemann's luck seemed to have taken a downward turn after he moved into the beautiful mansion.  Many say it wasn't his luck, but his murderous temperament that took a downward turn, but history speaks only of his luck.   Tiedemann's daughter died of diabetes shortly after his taking up residence in the house.  His mother followed quickly behind her and three more of the Tiedemann's children also followed their sibling into the afterlife.  Death came more and more often in Tiedemann's house.  His wife died.  His niece died.  A maid died.   Rumors began to circulate that Tiedemann was behind all the deaths. Other rumors surrounded the house itself.  People began to whisper that the house itself was cursed.

Rumors and stories about The Franklin Castle abound.  Mysteries lurk in the shadows there.   The house is riddled with secret rooms and hidden passages.  Tunnels creep underneath the house and old stories lay buried there.   In 1970, one of the occupants of the house found a secret room filled with the skeletal remains of babies.  Those that found the babies described hearing the phantom voices of crying babies long before they actually unearthed the remains.   Theories about the origins of the baby remains go from them being medical specimens, to them being the remains of Tiedemann's lost children, to them being the medical experiments of the mad doctor.

Ghost stories surrounding the Franklin Castle are prolific.   Residents and visitors have described hearing weeping babies and phantom children.  A black lady is said to be seen from one of the window. Nazi ghosts are prevalent and strange noises, voices, and lights fill the stories of all those who have wandered Franklin Castle.  The house gathers ghost stories like a child collects Halloween candy while trick or treating.

The house's recent history is as odd as its past.  The house was burnt to a ruin in 1999.  In 2004, the house was bought and it was said it was going to be turned into a club.  The website for this club still remains.   http://franklincastleclub.com/.   This was shown to be a scam by a Mr. Mislaps.  He got into some trouble over back taxes and was ordered to stop giving tours of the house.

The house has recently been rezoned as a 3 family dwelling.   One thing is for sure, with more people living in the house in the future, there are sure to be new ghost stories and new dark tales to fill the halls of this old house.
Email Post
Labels: American Haunted Houses Franklin Castle Franklin Castle Haunting Haunted Houses Most Haunted Places Ohio Ghost Stories

Unknown said…
I drive past this house almost every day. The architecture is amazing! It could be so beautiful ;)
January 10, 2013 at 7:58 AM

Julie Ferguson said…
What an interesting place to live. I would have loved to be able to take a tour and see the inside of this abode.
January 11, 2013 at 7:51 AM

Jessica Penot said…
Miss Ange... My understanding is that they've stopped tours for the time being. Maybe the new owners will open it back up sometime.