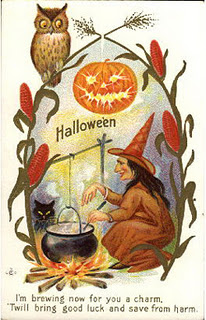 Those of you who have been following my blog for a while might remember this post. As I hang spiders and mummies for this year's Halloween party, I thought it might be nice to reuse my favorite Halloween post from last year. Halloween is my favorite Holiday. It has a very long history that is often forgotten. Although Halloween's roots can be traced back to pagan practices, it's name came from Christians. Halloween was the time of year when the ancient Celts believed that the veil between this world and the "otherworld" became thin allowing for spirits to have more access to our world. This was, naturally, quite terrifying to the Celts. In order to protect themselves from the spirits, people built enormous bonfires and cast bones into them to scare the spirits away. They also dressed up as terrifying spirits to confuse wicked spirits into believing they were spirits themselves. The Celts called Halloween Samhain. It was the Catholics that came up with the name Halloween. The early Christians were masters at taking local pagan holidays and integrating into their own Christian days. Even Christmas was stolen from Saturnalia. Catholics took Samhain and made it All Saints day, a day to celebrate the spirits of all the deceased saint. All Hallow's Eve was the night before All Saints day. The term All Hallow's Eve was eventually shortened to Halloween.

Through Halloween's long history there have been many traditions that have been simply left behind. This saddens me. So here are some I think we should bring back.

5. Fortune Telling: There are many types of fortune telling done on Halloween night, but one's fortune was always believe to be most easily predicted on Halloween. Whether you were reading tea leaves, apple peals, or gazing into mirrors to see your future, a prediction made on Halloween was always accurate.
Email Post

Chris 'Frog Queen' Davis said…
Very cool traditions. I am going to have to try the Colcannon.

magikalseasons said…
When older kids like teenagers would trick or treat instead of a treat they would get a rock which was painted as a Jack O' Lantern. We do not live in a place where we get kids coming but if we did I would do this again. I agree it would be great to bring back these traditions.
October 15, 2012 at 9:32 AM

Jeffery said…
Don't forget to set an extra place at the Dinner table for the ancestors too Jess!
Cheers!
October 16, 2012 at 7:10 AM