The Ghost of the Smithsonian Castle 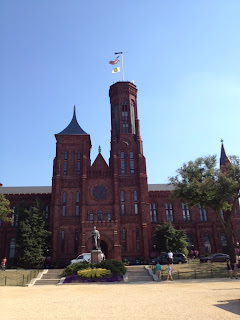 The Smithsonian Castle is a beautiful building. Washington DC is a stunning city whose classic architecture makes a traveler feel like they have been transported back to ancient Rome. Doric and Corinthian Columns grace the facades of elegant white buildings and the unity of architecture makes me imagine that this is what the great white city must have looked like. The Smithsonian Castle, however, is utterly different. Built in 1855 by the renowned architect James Renwick, this redbrick, Gothic beauty stands apart from all the classic buildings it is surrounded by. It looks more like a medieval castle than a Roman ruin and its haunting beauty draw in the eyes like a light in the dark.
The Smithsonian Castle is a corner stone of the mall in Washington DC.   It is the founding museum in the sprawling Smithsonian Museum complex which is spread out over Washington DC and now occupies over 30 museums and houses millions of artifacts, paintings, and other items of scientific, anthropological, and historical significance.  The castle is the most striking of the Smithsonian buildings not only because it was the first of the Smithsonian buildings and represents the birth of the largest museum complex in the nation, but also because it is the most haunted.
The museum is said to be haunted by James Smithson.  Smithson was a British chemist and mineralogist and the illegitimate son of the Duke of Northumberland.  He was born in 1765 and dedicated his life to chemistry and mineralogy.  He traveled Europe studying and publishing papers on his findings.  When he died, he left his entire fortune to the founding of the Smithsonian Institute and he was the founding donor of the institute.  Ironically, James Smithson never visited the United States and never saw the massive building that would bare his name.  However, his body was transported to the United States and his remains grace the first room in the Smithsonian Castle.   The urn below is where he now rests.   It is not surprising that his ghost has been seen throughout the castle.   Visitors and employees alike have reported seeing him wandering the halls of the beautiful red building that bares his names and the halls seem to whisper his name as you walk through them. 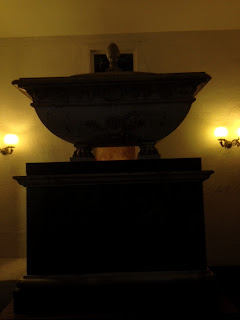 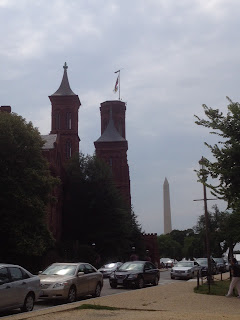 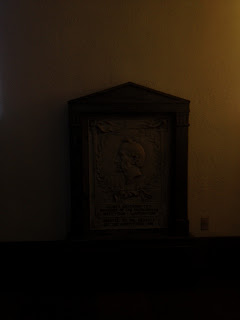 Little Gothic Horrors said…
I guess James Smithson's ghost is getting to do in death, what he was unable to do in life. It's nice to think of him as a ghostly custodian to the institute that he founded!