The People Behind the Painting 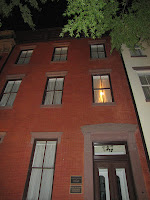 The old Rathbone house is the creepiest house in Lafayette Square.  There isn't anything tangible about the creepiness.  It is just something you feel in your bones.  The square is littered with ghost stories, but this house feels more haunted than the others. This house was the home of Henry Rathbone.

Henry Rathbone was a very respected member of Washington society.  He was the son of a wealthy man and the step son of a Senator.  Rathbone and his wife, Clara Harris, were close friends with Abraham Lincoln and his wife.  When Rathbone and Harris were engaged, the Lincolns' invited them to the theater with them.  This was a great honor and the Rathbones sat in the presidential box with the Lincolns.  Midway through the play, John Wilkes Booth snuck into the theater and attacked the president with a large knife.  Rathbone had fought in the civil war and was a very brave man.  He jumped up and put himself between Booth and Lincoln.  Rathbone was stabbed several times and was severly injured.

Lincoln was shot by Booth and his ghost has its own story, but Rathbone survived.  Rathbone was never the same.  He married his fiance, Clara Harris, and the two lived in a lovely home on Lafayette Square across from the White House.  They had three children and for a while things seemed fine on the surface.  Beneath the surface, Rathbone was falling apart.  His deteriorating mental health was slowly pulling his family down and when Washington society could bare his behavior no longer, he and his family were sent to Germany as consuls.  The move was all it took to push Rathbone over the edge.  One night he crept up to his sleeping wife and shot and stabbed her.   When he was done, he crept into the children's room and looked down upon them sleeping.  As he raised the knife to stab them, the nurse barged in and shooed him away.  He fled and stabbed himself.

Rathbone was committed to an asylum in Germany.  When the police interviewed him and asked him why he wanted to murder his family, he said that the people behind the painting told him to do it.

Rathbone and his wife were buried in Germany and their graves were forgotten.  They were abandoned and left to rot.  Eventually, the state decided they needed the grave space and dug them up, cremated them, and shipped them back to the states.  Their remains were lost.  Ever since that time the old Rathbone house on Lafayette Square has been haunted.  Visitors to the house describe seeing phantom lights and hearing odd noises.  Rathbone and his bride have both been seen in their old house.   Perhaps the people behind the painting brought them home. 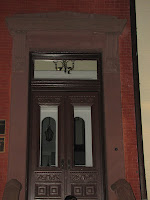 Little Gothic Horrors said…
Oh, love the part about the people behind the painting. Über creepy! Does anyone have any idea what painting he may have been referring to, or is it a mystery?
July 19, 2012 at 10:18 PM

Kolena locksa said…
Hi, I really enjoy your blog. I love reading ghost stories and Halloween is my favorite holiday. I just wanted to point out that Booth did not attack Lincoln with a knife, he shot him in the head from behind. Rothbone went after Booth and Booth attacked him. Like I said, I enjoy your blog, but please make sure you have your details correct when you post. :)
November 2, 2012 at 11:15 AM