Traveling Spirits and the Manassas Battlefield 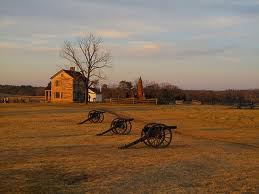 The Battlefield at Mannassas National Park has seen more than its fair share of bloodshed.  On July 21,1861 it was the site of the First Battle of Bull Run and on August 28th- 30th it was the site of the Second Battle of Bull Run.  It was here that General Thomas Jackson gained his nickname stonewall Jackson.  It isn't surprising that a place like this would be considered haunted.  Such places usually carry a few ghost stories, but it is always fun to hear the ghost stories from those who have actually experienced them.

Last week I had a wonderful chat with a young man who had spent a considerable amount of time sneaking around the battle field at night and chasing shadowy ghosts through the dark corners of this old battlefield.  He had some particularly interesting stories about Manassas. One of his stories about a traveling ghost was particularly interesting to me.  Apparently, he spent some time ghost hunting by The Stone Bridge, which the Union retreated across after both battles.  On the Stone Bridge, the young man and his friends were able  catch several EVPs of cannon fire.   The young man was a musician and he also describes hearing traveling sounds as well.  As the sound traveled, he was able to describe a change in pitch and frequency. He indicated that he saw a shadow person when he was out one night and later he and his companions saw several shadow people.  This is consistent with other stories I have read about online.  He and his group were also able to capture a mist form walking by The Stone House, which was used as a hospital during both battles.

One of the most interesting things he described relates back to my fascination with multicultural perspectives on ghosts and hauntings.  Last summer, I interviewed a young man from Taiwan who told me that his mother would always make him go to the temple to cleanse away bad spirits whenever he went to a cemetery or a place that might contain spirits.  In his culture, it is believed that spirits can follow you home.   I always wonder why I don't gain more of a sense of that in Western beliefs and ghostlore traditions.   The young man I interviewed last week described such an incident happening within his group.  He said that following one of his group's visit to Mannasses, the young woman from his group brought something back with him.  Things in her house moved on their own and mirrors shattered.  Objects disappeared and relocated.  The haunting continued until she told the spirit to leave and then it vanished as quickly as it came.
Email Post

Julie Ferguson said…
I just love the battlefield ghost stories. This one was just as fascinating. Also, I hope nothing follows me home after a ghost hunt.
June 15, 2012 at 11:25 AM