Fact or Faked: The History of Ectoplasm Done Wrong 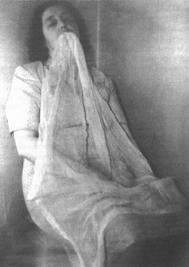 I don't watch much paranormal television, but I've been housebound lately and my television consumption has increased.  I was watching Fact or Faked:  Paranormal Files today and something they said made me angry.  I wanted to say, "Read a book!" to the hosts of this show, but reading seems to be a lost art.  The hosts of this show wanted to investigate the ectoplasm claims from the early 20th century.  They said that although tons of research was done on this, no one had shown ectoplasm was a hoax.   Ectoplasm was conclusively proven to be a hoax in the 1920s and it was a disgusting and vile hoax at that.  Here is a post I did on the revolting history of ectoplasm two years ago.

During the time contemporary to and following World War I there was and explosion in what was then called spiritualism or mentalism. Spiritualism is a religious movement revolving around communicating with the dead via a medium. This explosion was brought on by the massive number of people that died in the war and of sickness during this time period. One of the more bizarre activities that became prevalent in this movement was the explosion of ectoplasm. Ectoplasm is a term used to define a physical manifestation of the supernatural and it usually came out of the medium's nose, mouth, or ears. The term, defined by Charles Richet, meant spiritual energy externalized by psychics. It was for many years used as absolute confirmation that the supernatural was tangible and provable. It was supposed to be the physical remains of a ghostly presence. Ghosts were there and they were real and the medium could prove it by showing ectoplasm.

What was discovered was both revolting and eye opening. Although many techniques and materials have been used by mediums to produce ectoplasm, the medium examined by this panel was found to be storing a sheep gut and fat mixture in a sack in her vagina which she expolsed at the appropriate time to make it appear as if she was expelling ectoplasm. Further research into other psychics revealed many other grotesque techniques for producing this fraudulent material. Some women learned how to regurgitate on demand and swallowed yards of muslin and cheese cloth which they would vomit on command. Others stored materials in their rectum.  After careful study, not a single medium that could produce ectoplasm was shown to be doing it by supernatural methods.

Although this story is disgusting. It is more about the disgustingness that is possible within humanity when exploiting the needs of those suffering from the lost of a loved one than the vileness of the actual act. Although I love a good ghost story, it is always amazing to me how much more horrifying live people can be than ghosts. Ghosts have never been shown to leave real ectoplasm, but it is amazing how many mediums were shown to be literally pulling it from there asses.

So, to all those Fact or Faked: Paranormal Files fans out there, the Fact of Faked team did not prove anything that wasn't already shown to be fake in the 1920s by Scientific America.  I don't mean to say I don't enjoy Fact or Faked.  I obviously do or I wouldn't have watched it enough to do this post. In fact, I really like Fact or Faked quite a bit.  I love the skeptical approach to the paranormal.  I was just surprised at the lack of research that went into this one particular case. 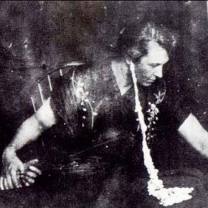 Sandra said…
it's not the first time they didn't bother to do the research or chose to ignore for the sake of tv. when they do that, it is annoying. but i too still watch the show. it's fun.
May 8, 2012 at 5:47 PM

Jessica Penot said…
Sandra... I absolutely agree with you. Their research may be poor sometimes and it drives me crazy, but I still can't stop watching. It is good fun!
May 8, 2012 at 9:01 PM

Little Gothic Horrors said…
I can't stand the fact that people perpetrate these hoaxes. It only gets in the way of the search for the truth.
May 8, 2012 at 10:15 PM

Courtney Mroch said…
OMG! LOVE this post, Jessica! FoF is a joke. I caught them not checking their facts on the Department of Congress's Haunted Places List. They spoke about it as if it were gospel when it doesn't even exist!!!! Even scarier, the prestigious Time magazine referenced it too. So not only are people not reading, but editors are failing to do their due diligence.

Lack of real research is key to FoF. You just found more proof of that. I would love this show if it were actually checking into things properly.

Excellent catch AND excellent post AND thanks for the chuckle. ("...how many mediums were shown to be literally pulling it from there asses.")
May 9, 2012 at 12:35 PM

Jessica Penot said…
Thanks Courtney... It is sad that they do so little fact checking. You would think with the kind of budget a television show like that has they could hire a fact checker. It is so much fun. I hate that misinformation has to ruin it. Why call yourself "Fact or Faked" if you aren't going to make sure your Facts are any more real than the fakes.

Emma... I agree. It is the hoaxes that make the real things so unbelievable. People are always looking for the lie and people like these mediums are the reason why.
May 9, 2012 at 1:48 PM

Julie Ferguson said…
Good post! This isn't the first time someone has busted this show for not checking their facts. Also, they need to quit trying to prove things are faked that have been proven many times before.
May 9, 2012 at 7:01 PM

pengobatan penyakit asam urat said…
Words sharing pal motivation may be accepted: D
Smile, leave sedihmu. Bahagialah, forget takutmu. Who you feel sick, no equivalent would you be happy.
Tears do not always show sadness, sometimes because we laughed happily with our best friend.
May 10, 2012 at 1:10 AM

Jessica Penot said…
Adsila... You are so right. What is the point in proving what has already been proved?

Jeffery said…
It just proves my point that the line between Journalism and Entertainment has completely been eroded Jess!..Be it a Program about Ghosts or Politics nothing they produce can be trusted for accuracy. Either one has total credibility or none at all, that's how Ethics works! Oh How I despise that word "Infotainment". Cheers!
May 11, 2012 at 12:01 AM

Linux World... said…
very good informantion i will definately visit these places i hope i find out something i hv many haunted places information too for that u can visit my blog at http://ghostexps.blogspot.in/
May 15, 2012 at 6:26 AM