My Vacation Pick of the Year: A Haunted Cruise 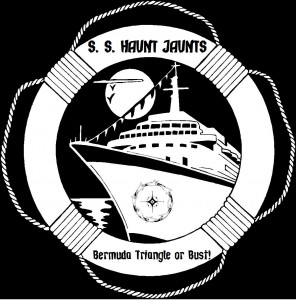 Haunt Jaunts, run by the fabulous Courtney Mroch, has been one of my favorite blogs since I started writing about ghosts.  Her blog and her writing has inspired me from the beginning.  Not only is she an amazing writer, but she is an interesting and charismatic person that I have been lucky enough to ghost hunt with, so when I found out that Courtney would be hosting a haunted cruise I was beyond thrilled.  If I can, I'll be taking this cruise into the paranormal.  This cruise through the Bermuda Triangle will feature haunted destinations and ghost hunting presentations.  It will be everything the paranormal enthusiast could ever possibly want.  Below you will find the information I gathered on the cruise from a press release:

Haunt Jaunts, Courtney's travel blog for restless spirits, is expanding its reach into the paranormal tourism industry. In addition to covering the best places to take a haunted vacation, it’s now offering a way to experience them, via a cruise into Bermuda Triangle territory during Halloween week 2012.


“We’re really excited about our first ever group event,” Courtney Mroch, Director of Paranormal Tourism for Haunt Jaunts, says. “I love cruising and have long been wanting to branch out into group events. When Tracey Steslow from A Suite Cruise of Cruise Planners contacted me about doing a paranormal theme cruise, I was immediately on board with the idea. Pun intended.”

Mroch and Steslow researched cruises and decided Royal Caribbean’s Majesty of the Seas sailing out of Miami on October 29, 2012 was the one for them.

“It was pretty much a no-brainer,” Mroch says. “We’d be on a ship at Halloween. We’d be in the Bermuda Triangle on Halloween. That’s exactly the sort of thing Haunt Jaunts is all about. On top of it all, Key West, one of the cities that’s touted among the most haunted in the nation, was one of the ports. Even the prices were fantastic. It was the perfect cruise for us to offer.”

And that’s how the Haunt Jaunts Halloween in the Bermuda Triangle Cruise with special guest investigators Ghost Eyes Paranormal was born.

“I am excited to be a part of this,” Steve Vaughn, founder of Ghost Eyes Paranormal, says. “How can you say no to being in the Bermuda Triangle for Halloween? It is a true honor to have been asked to speak at this event. I look forward to meeting everyone and sharing what I know throughout the cruise. Halloween cannot get here fast enough.”

Mroch will be conducting a “Bermuda Triangle: Legends and Lore” presentation while aboard ship. Vaughn will be conducting a discussion about all things paranormal investigation, including techniques and equipment.
And as far as the prices Mroch mentioned? They really are reasonable. They start from $400.53 per person double occupancy, or $801.06 per cabin, for an inside cabin. That includes room, all onboard meals, as well as all onboard entertainment, Haunt Jaunts events, gratuities, taxes, and even a $25 per stateroom ($12.50 per person) onboard credit to spend however the cruiser wishes. (Photos, drinks, merchandise, etc.)

Courtney Mroch said…
You are TOO awesome!!!! THANK YOU so much for posting about this. I greatly appreciate it, I would love it if you could make it (there tons to do for the kids too), but I understand with school and such it could be hard. Still, I really do appreciate the write-up about this.
April 15, 2012 at 6:17 PM