The Ghost of The Dorsey House 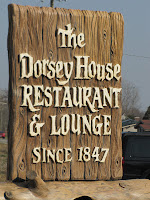 The Dorsey House is located just outside of Port Huron Michigan.   My family has been eating at the Dorsey House since it was a carriage house populated people traveling across Michigan by horseback.  The restaurant has a long history and that history is peppered with just enough sorrow to merit a ghost story.  You wouldn't know it now.  The restaurant is cozy and warm.  The food is good and the staff is friendly.  The restaurant feels new, because it has been rebuilt.   However, a ghost named Ira still hides in the shadows there, waiting to scare children in bathrooms and torment the staff late at night. 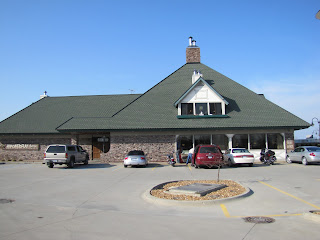 According to local legend, Ira was a violent sort of fellow who was prone to fighting.   During one of his scraps at the old Dorsey House, he was killed in the parking lot.   Since then, his spirit has lingered at the restaurant.  The old Dorsey House was pulled down in 1995 but that hasn't stopped Ira from haunting the new eatery and stories of his haunting persist to this day.  I asked our waitress about Ira and she indicated that doesn't particularly believe in ghosts.  Despite this, she says the restaurant is riddled with things she can't explain.  The water turns on and off by itself and lights flicker and go off.   Others have reported seeing strange lights and mists in the historic restaurant.   I saw nothing there but good food and happy faces, but my son says he saw a strange light in the bathroom.   Young eyes are prone to exaggeration, but my son's story reminds me of my favorite part of ghost stories.   They stimulate the imagination and spread on the wings of legend keeping them alive long after the living are dead.
Email Post

Courtney Mroch said…
LOVE their sign! It's got a lot of personality. And even better it may have a restless spirit as a perpetual patron!
April 28, 2012 at 3:50 PM

Jessica Penot said…
I think that sign is the only thing left that really reflects the age and the history of the place. It is definately my favorite part.
April 28, 2012 at 8:10 PM

Matt London said…
Ira wasn't the only one. Mrs. Dorsey haunted the original building, being spotted in the office and in the cellar. There was another, more malevolent ghost that would start small fires in the walls. Ira came about after they rebuilt. The new building was constructed on the spot where he was killed, and when the new place was complete he started his shenanigans. Naturally people assumed that Mrs. Dorsey had moved to the new building, and refereed to the spirit as Mrs. Dorsey. The the ghost got wicked, breaking the glass tops of the pinball machine and tossing bottles of the back of the bar. It wasn't until they discovered Ira's true identity and stopped calling him Mrs. Dorsey that Ira calmed down.
October 23, 2015 at 6:34 PM

Lauren Kelly Hutchinson said…
I live only five miles from The Dorsey house never paid attention at night haven't been there in years but it would be awesome to see a ghost there
June 21, 2016 at 6:18 PM