Can Ghosts be Captured? 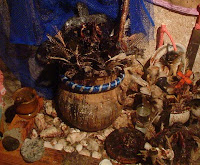 Nganga was originally a word referring to a spiritual healer in the Bantu culture.  It continues to have that meaning in that culture.  However, as Nganga has taken on a different meaning in  Haitian, Cuban, and Brazilian Voodoo cultures.  It refers to an iron pot containing a large number of items such as bones, often a skull, chains, nails, bullets, and feathers bound together with chains and padlocks used to contain  spirits.   The spirits can be good or bad and the reason for their containment can vary.   The older the spirit the stronger the power of the nganga.

I learned about the Nganga on a show called Oddities on the Discovery Channel.   Such an object made me wonder if a spirit or ghost could be captured and contained in an object.   There are many circumstances in which objects are said to be haunted.  Robert the Doll and the Crying Boy Painting are classic examples of objects that are said to carry malevolent spirits with them.   However, it is an entirely different thing for something to be haunted and something to be created to contain a spirit.  Movies seem to love this idea.   Thirteen Ghosts shows a man capturing ghosts for his own malevolent purposes.  Ebay certainly loves this idea. Pendants and objects containing ghosts and spirits are prolific there and many of them sell for $666.00.  According to The Black Arts, by Richard Cavendish this is a believed possible by those who practice ritual magic.  Apparently many people believe this possible or at least want other people to believe it possible because these items seem to be quite prolific on the Internet.

However, despite my research I haven't found any stories by those who have bought or found Nganga or other man made spirit containing objects with interesting ghost stories.  You would think that if ghosts or spirits could be forcibly contained such stories would be more prolific than the number of people selling objects like this.  I really have no experience in these things so I can't conclusively comment one way or another, but I have to wonder if the Nganga on the discovery channel really did contain a ghost or spirit.   The stars of the show were certainly creeped out enough by the Nganga that they wouldn't keep it in their shop.   I'm not sure what I think, but I know the idea is very creepy and I certainly wouldn't want such an object anywhere near me.
Email Post
Labels: Captured Ghosts Ghosts Haunted Items nganga Oddities The Discovery Channel

magikalseasons said…
I saw that Oddities. I am not sure about capture and containment of a ghost. I do have an amber heart charm I wore for protection when friends played with a talking board. It now has a vibe to it. Perhasps it should go on ebay.
April 23, 2012 at 2:25 PM

Jeffery said…
Interesting Jess! Look up Pre Historic Shamanism for some better insights than TV programmes can give. It's a genuine field of study that examines the psychology and anthropology of ritual magic.
Cheers!
April 23, 2012 at 3:02 PM

Jessica Penot said…
Magikal Seasons... That is interesting. I would love to hear more about the charm.

desitheblonde said…
WELL DEPEND WERE YOU GO AND HOW YOU WNAT THEM GONE THEY LIKE TO STAY OAT THE HOUSE AND THEN THEY LIKE THE PLACE THEY WILL STAY TILL YOU ASK TO LEAVE OR ASK YOU IF YOU WANT TO STAY WITH T HEM
April 26, 2012 at 2:41 PM

The Mythical and Paranormal Realm said…
I'm sure all the haunted items on Ebay are completely genuine and not hoaxes at all.

That said, the shamanistic tradition of binding spirits to physical vessels does seem to be real. There are signs of it in the occult as well.
May 15, 2012 at 9:08 AM