The Many Ghosts of King's Island 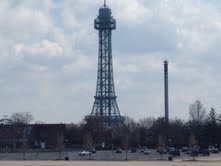 It is amazing what you can find along the way when you go on a road trip.  Ghosts lurk around every corner and phantoms seem to find you when you are looking for fun.   In my past travels,  I have noted that many places devoted to fun are also haunted by sorrow.  Many of the Six Flags are haunted and Disney Land is as much of a ghost land as a wonderland.   It is, therefore, no surprise that King's Island in Cincinnati, Ohio is teaming with ghosts.  What was a surprise to me, was that I should just happen upon such a haunted place by accident.  While staying at Great Wolf Lodge, I thought I would ask the staff about the allegedly haunted Great Wolf Lodge in Sandusky.   What I found was that the amusement park that I could see from my back patio is notoriously haunted.
There are a plethora of ghosts haunting the various rides at King's Island.   A little blond girl in a lovely blue frock is said to wander the Waterworks.  Her ghost is said to be linked to a tiny cemetery located just off the grounds of King's Island.   The Eiffel Tower ride is haunted by a ghost named Tower Johnny.   He is said to have made an unfortunate decision on the night of his graduation.   In 1983, he climbed up the elevator shaft of this ride and lost his footing.  He fell to his death after being cut in half by the elevator cables.   His ghost has been seen wandering the Eiffel Tower ride and tormenting those who are seeking a more earthly thrill.  The Octopus Ride is also said to be haunted by an ill fated rider who died  on the ride and White Water Canyon is haunted by a ghost named Woody who comes out after dark and throws rocks at those who happen by. 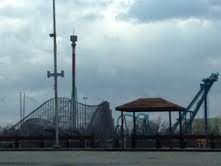 I couldn't go to King's Island during my trip because it was still closed for winter.  But peaking through the fence at it in its stark, lonely, winter garb made it seem all the more haunted.    The rides were quiet and the air was thick with the last breath of winter.   I could imagine ghosts wandering in the shadows of the silent park and as night came I could almost see a lonely girl in blue looking for her way home.

Jeffery said…
Hmmm! I might do some digging! Puts aside for a rainy day! You'd think the amusement park owners would do there best to keep such stories Mum ay Jess!
March 21, 2012 at 10:40 PM

Justine’s Halloween said…
I never thought of amusement parks as especially haunted places, although there is sometimes a creepy element to them at night. I guess there is a potential for ghosts in places with dangerous rides or equipment. That Tower Johnny story is just disturbing. Now I'm curious about the Disneyland ghost stories!
March 22, 2012 at 9:18 AM

Jessica Penot said…
Jeffrey, I think they only try to keep them mum when they come from a death that is their fault. There is an entire website dedicated to deaths at amusement parks. It is fun to read. In most cases, the deaths are due to some profound idiocy on the part of the victim. Like the guy above who tried to climb up the elevator shaft. Other than that, I haven't seen any of the parks comment one way or another on the ghosts. Although, at Disney the staff did talk openly about the ghost.

Justine. Here is a link to the Disney haunting stuff....http://ghoststoriesandhauntedplaces.blogspot.com/2010/06/haunting-of-happiest-place-on-earth.html
March 22, 2012 at 3:40 PM