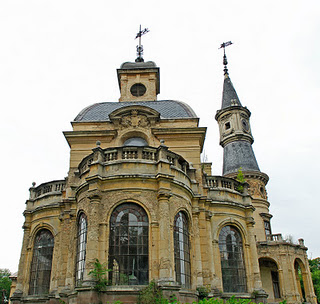 This story was the most terrifying thing that has ever happened to me—I swear! I believe in ghosts, demons, and everything else that might be considered paranormal. So this is an account of my story, which happened about five years ago.

My buddy Ryan and I, along with three of our friends: Jared, Sunday, and Erik decided to check out Ravenhurst Manor in Whispering Pines, California. (The estate was creepy and it has always reminded me of Amityville Horror Story or the Murder House in Los Angeles.)

One of the town’s most famous haunted houses was this three-story building christened, Ravenhurst Manor, which served as a school for disturbed teens in the 1800s and was said to be haunted by the ghost of its former headmistress. It was purchased in the 1960s by Maxwell Donovan who hoped to restore it, and it was during the reconstruction that a lot of the supernatural phenomena began to occur. At one point during construction, a portion of the second-story collapsed, killing three of the workers. Other construction-workers claimed they heard voices and footsteps whenever they were alone, and that pieces of construction equipment would often be thrown across the room. Even spookier, the workmen said they often spotted a Shadow Man staring at them from inside the mansion. I’ve heard that innumerable exorcisms and investigations have taken place at the mansion since, but the presence that haunts it is said to still remain there today.

So, getting back to my story, one of my buddies, Ryan had done some research on Ravenhurst and wanted to go see the mansion. I used to live in Whispering Pines and during my childhood, the insidious house was vacant, with barren, gnarled trees, and twisted weeds protecting the sparse yard where birds never lingered. I hadn’t been back to my hometown in years, not since I’d gone away to college. And I wasn’t that eager to go back…

Ryan talked me into it and we left late one sweltering, August afternoon on route to Ravenhurst. We had just gotten onto to Highway 101, which leads you to the road that Ravenhurst was on when I got an eerie chill. As we are driving, my friends claimed that they were also getting this feeling as if something bad was going to happen. Still, we didn’t turn back.

We drove through town and into the more affluent neighborhoods on Pine Street and Acorn Avenue. It was a warm day, but in Whispering Pines, it was muggy. Thick ground fog swaddled the town, the drizzling mist softening the streets. I drank in the brisk air, welcoming the chill on my flushed cheeks. Acorn Avenue appeared uninhabited, the houses strange and reticent. The estates had curving driveways, high gates, and spacious lawns. The neighborhood was bathed in an eerie mist. Not a good sign.

As we neared Ravenhurst, we noticed that the property had a gate around it about 6 feet tall. We parked in front of the gates and just stared at first. No one said anything. I gotta tell ya, it is an unusual Gothic mansion, and its perimeters are barricaded with a wrought-iron gate. Beyond it was this dense, thick wooded area that the locals call, “Deadwood Grove” which is also considered haunted. Crickets sang and dragonflies buzzed the entrance. Grass grew wild and tall in the yard, sprouting through the cracks in the cement path leading to the porch. The huge mansion was vast, rambling, and wilting. It consumed the sky and blotted out the weak sun. Harsh seasons had torn shingles off the roof. Windows were randomly boarded shut. Tall, thorny weeds grew rampant and towering trees threatened to overtake, overwhelm, and engulf the grounds. Wind rustling between the oaks whispered of an ageless fear. Ground fog swirled above the terrain like ghostly vapors. A crooked No Trespassing sign hung from the newel post.

A prickling sensation glided over my body then settled in my stomach.

After Ryan and Jared departed, the three of us, Sunday, Erik, and I stayed in the car talking. Sunday confessed that she’d been to Ravenhurst before about two years ago with her old boyfriend and they had seen this dark figure, like a tall, super dark shadow near the back of the house. It freaked them out so bad that they had immediately left. She said the shadow was so scary that she had goosebumps. Just talking about it was making her voice go high and shrill.

All of a sudden, Sunday pointed and whispered that she saw the same black figure—and when we looked; there was this big black shadow by an oak tree. The shadow hung heavily, like a spatter of crude oil, pulsating and swirling until it nearly touched the higher branches. Then it freaking moved! It was only about 15 feet away from us. My heart was thundering in my chest. My palms were sweaty and my throat felt dry. Breathing out desperate little choking noises, I shook my head, hoping the image would fade. The headshake didn’t make a difference. Only reinforced my worst nightmare.

Shadow People were “real.” It was like the thing was standing very still and just staring at us.

The three of us freaked out and ducked down in the car. My gut twisted on the lump of fear anchoring me to the seat. Erik’s face paled and Sunday started to cry. At that moment, Ryan called on my cell and asked if we okay, and I replied yes.

Suddenly, the phone went dead. At this point, I am freaking out, so I try to call Ryan back, but he doesn’t pick up.

And then we heard this blood-curdling scream, and we see Ryan and Jared sprinting toward the gate. They climb over it so fast that Ryan rips his jeans but doesn’t care, and they jump back in the car and we drive off.

As we were driving back toward the freeway, we asked them what happened.

Ryan told us in a shaky voice that as they stepped onto the porch, they saw two yellow eyes staring at them from out of a black shadowed area on their left, so dark it looked “wrong.” Too dark to be a shadow. Then Jared felt something touch his arm. It gave his shoulder a “hard” shake and then they felt an icy blast of air hit them. That was enough to spook the guys and make them run back to the car.

I told them to stop the car before we got on the freeway, because we are all freaking out by then. When we pulled over at a gas station, Jared opened the door and said he felt sick to his stomach. He went into the restroom to splash cold water on his face. I glanced at Sunday sitting in the backseat sitting between Erik and I, she had her head tipped back, and her whole body was trembling. She could barely talk, except to mutter that she didn’t feel well either. Her skin was ashen and her hands were shaking. She felt really cold too and it was about 90 degrees that day.

When Ryan returned to his car, we turned back onto the highway and headed toward Castro Valley, which was about a 45-minute drive from where we were to drop Sunday off at home. As we are driving, I noticed that Sunday still had her head resting on the back of the seat, her eyes closed, and she was still shivering pretty badly. She got really freaked out when the phone went dead, so I figured she was just having some kind of a panic attack.

I put my hand on her’s and was about to tell her that it would be okay, when she opened her eyes really wide and started screaming, “It’s coming to get us! It followed us! The shadow—it’s a demon—it’s coming!”

Sunday told Ryan to drive faster because the dark figure that had been watching us from the Deadwood Grove was going to follow us home. I tried to calm her down, but she kept crying and whimpering incoherently. She was really scaring us, so Ryan took her home first.

Later that night after we dropped Sunday off at home, I tried to call her to make sure she was okay, but she never answered her cell. When I went over to her house the next morning, her mom explained that Sunday had a terrible nightmare, and when she woke up, a tall dark shadow in the shape of a man stood over her bed, and it whispered her name. Sunday was so upset that she went to stay with her grandfather who is a priest in Dublin, and I never saw or spoke to Sunday again.

So the events of this afternoon are a little unexplainable but once again, it was the scariest thing ever to happen to my friends and I. This event is what got me started in the ghost hunting business with my buddy Ryan.

Paranormal Spy said…
Thanks for having me as a guest. To read more of my experiences at Ravenhurst, please visit my blog.

wicKED said…
Truly chilling. Nice seeing some background on your ghost stories.
December 4, 2011 at 10:13 AM