A Brief History of Ley Lines 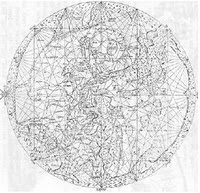 In the 1920s, a man named Alfred Watkins claimed to have discovered a grid of straight lines which he called leys from the Saxon word for meadow.  He believed that many of the archaeological sites of the ancient world, particularly the megalithic stone monuments of the ancients, were connected by a series of  man made tracks or lines.   He said that "a fairy chain stretched from mountain peak to mountain peak as for as the eye could reach."   Watkins put his beliefs about ley lines in two books "Early British Trackways" and "The Old Straight Track."  Both of these books were almost completely ignored by serious archaeologists.

Yet, Watkins was not alone.  Other historians and archaeologists had proposed similar theories.   An American  tracked the alignment of Native American mounds and burial sites across the Americas using the same technique as Watkins.  A German named Heinsh tracked the alignment of holy hills and ancient churches across German.  In the Andes, the Nazca lines were shown to follow the similar pattern of  lines by a British explorer named Morrison. Driven by theses linking theories, in the 1960s,  new voices in ley research proposed a radical new theory.  They suggested that leys carry a mysterious earth energy that was know to the ancients but forgotten by us.  They believed that ley lines represent lines on the earth where mystical energies are aligned and amplifies and where the ancients found their spiritual centers.

Those who believe in ley lines report increase psychic activity along these lines.  They also report increased paranormal activity and increases in ghost sitings and hauntings.    Believers say that leys are located on channels of geophysical power and that intersections of leys form nodes.   Many famous hauntings occur and have occurred along leys and on nodes.  The famous Phantom Army at Loe Bar was sited at a particularly active node.  Many say poltergeist activity increases along these famous lines.  I have read some theorists who believe that Ley Lines might serve as pathways or roads for the dead.

There are many theories about ley lines and their paranormal and historical significance. Whether or not you believe in their paranormal power, the theories regarding them are fascinating and numerous.   Is there some energy connection that ancients saw that we have become blind too?  Are we lost in the modern world or did the ancients just use particularly reliable astronomical signs to build their sites on?  To me, either way, it is worth reading about and studying because the slightly mysterious always is and anything that connects the ancients to ghost stories certainly is.
Email Post
Labels: Ley Lines Ley Lines and Ghosts Ley Lines and Hauntings

Julie Ferguson said…
We are checking into the ley lines that seem to flow underneath Sedona, AZ. That place seems to have mystical powers, along with ghosts, and UFO sightings.
November 17, 2011 at 8:26 AM

Scared said…
I like the idea of ley lines as roads for the dead. It seems they could mark areas of increased geo-magnetic activity which could in turn cause witnesses to perceive paranormal events. But I never understood why we want to put so much meaning into where ancient buildings were built; today, we don't put nearly as much thought into a structure's wider context as we think people did thousands of years ago. I think it stems from the fact that when we only have a few ruins to go by, we tend to assign more importance to the things that we can see, not the things that are lost forever, like the way ancient peoples used and thought about their own buildings. Anyways, ley lines are awesome is all I meant to say!
November 17, 2011 at 9:49 AM

Jeffery said…
Interestingly Ley lines may have a basis in the Physics of the Earths Magnetosphere and the polarization of Iron based geology and strata. Some work was done in a non related field involving how Birds in particular navigate there way around the globe. As you may know the Magnetosphere accounts for the Aurora Beaurialis and the Northern Lights in the Earths atmosphere, it would be interesting to know more about how it flows through the Earth itself.
November 17, 2011 at 11:48 AM

wicKED said…
I like the idea of that. I heard a story teller talk about how divining rods could detect ley lines and lead you to spirits.
November 17, 2011 at 12:44 PM

Jessica Penot said…
Scared... You make a lot of good points and I think your reasoning is why archeologists and historians have never taken ley line theories seriously.

Jeffrey... I've heard that too. Some say that is why ghosts are drawn to leys as well.