Is a Person Really Haunted or Are They Mentally Ill? 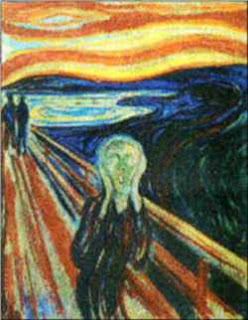 This is a question I deal with a lot.   Sadly, a large number of mentally ill people suffer from delusions of persecutions by demons, the dead, or other supernatural entities.   The devil and demons torment those that suffer from any number of psychotic disorders and medication and proper mental health treatment can help these people live a normal life and take their demons away.  Modern medicine is a miracle in most cases.  People who might have lived locked up in a mental institution 50 years ago can now live relatively normal life free from the terror of the demons that live in their mind.

As I watched some odd show on TV about a young man being tormented by a demon that researchers thought was connected to his haunted house,  I realized that the line between haunting, possession, and true mental illness is blurry to many.  The young man on the show demonstrated classic symptoms of schizophrenia.  He was at the right age for his first psychotic break.  He was having command hallucinations.  His thought patterns were disorganized and he was no longer rational.  To me, this wasn't a haunting, it was a young man who needed help.   For sceptics, this is the obvious answer to all hauntings and demon possessions.  It is easy to say mental illness is the answer.  However,  I think there are ways to see a difference between the supernatural and the natural affects of mental illness.  Obviously, many psychiatrists and therapists don't feel this way, but I think when diagnostic criteria for a mental illness aren't met and treatment doesn't work, other things could be considered.

First,  lets talk about mental illness.  In order to be diagnosed with any mental illness a cluster of symptoms has to be present.  So someone who is describing the ghosts of the dead tormenting them in the absence of other symptoms could really be seeing them (in my opinion).   Here are some examples of  the diagnostic criteria for some mental illnesses in which delusions of ghosts and demons and paranormal events are common:

Paranoid Schizophrenia:
1.Characteristic symptoms: Two or more of the following, each present for much of the time during a one-month period (or less, if symptoms remitted with treatment).

2.Social or occupational dysfunction: For a significant portion of the time since the onset of the disturbance, one or more major areas of functioning such as work, interpersonal relations, or self-care, are markedly below the level achieved prior to the onset.

3.Significant duration: Continuous signs of the disturbance persist for at least six months. This six-month period must include at least one month of symptoms (or less, if symptoms remitted with treatment).


Schizotypal Personality Disorder:
A.   A pervasive pattern of social and interpersonal deficits marked by cognitive or perceptual distortions indicated by 5 or more of the following:
1.  ideas of reference
2. odd beliefs and magical thinking that are inconsistent with cultural norms such as belief in clairvoyant, telepathy, or a sixth sense.
3.  unusual perceptual experiences, including bodily illusions
4.  odd thinking and speech
5.  paranoid ideation
6.  inappropriate or constricted affect
7.  behavior or appearance that is odd, eccentric, or peculiar
8.  lack of close friends other than first degree relatives
9.  excessive social anxiety that is associated with paranoid fears rather than negative judgements about oneself.

Psychotic features can also be present in mood and other disorders that could lead to delusions of persecution from otherworldly forces.   However, when looking at a functional person who believes in ghosts or the supernatural and sees things haunting him the easiest way to determine if he might be really mentally ill or just haunted is to ask if meets other criteria:  Is the person normal otherwise?  Do they have successful, happy interpersonal relationships?  Do they make sense when they talk to you?  Can they hold down a job?

An example I have is of a fellow I worked with some years ago in one of the three cities I've worked in.  I worked with this fellow for a long time and he was completely resistant to treatment.  He was a father of three who had a stable job and a happy marriage.    He had no symptoms of bizarre behavior and had many friends.  Out of the blue, a ghost began to torment him.  He went to seek medical help.  He had been in and out of hospitals and never had any medication worked.  As a professional, I couldn't say this, but I had to wonder if his ghost may not have been real?  He was a normal fellow in every other respect and no treatment worked.   He was not superstitious and didn't believe in ghosts himself so he was confounded and angry as to why the mental health community just couldn't help him.

I've interviewed many people who have described persecutions by demons and ghosts and haunting.   I've written their stories and I've believed these people, but skeptics and other professional always ask me how I know these people aren't just crazy.  I always answer with the above.  They were otherwise normal, healthy, balanced people.   They had no history of mental illness and when they left their house or escaped the haunting situation they were able to return to a normal life.  It is simple.   Many sane and normal people describe paranormal experiences and once mental illness and natural phenomena are ruled out,  the alternative has to be considered, and maybe that is the most terrifying possibility of all.
Email Post
Labels: Mental Illness and the Paranormal

wicKED said…
Have you ever dealt with the argument that some mental illness can cause people to become more "sensitive" to the paranormal? You always hear the old stories that children (and even cats) can see into the supernatural world. Perhaps due to the development or structure of the brain? I had a great aunt that suffered dementia and paranoid delusions in her late years. One winter, she kept screaming out loud about her next door neighbor floating through the walls and watching her at night. She would go on and on about his bloody hands. These episodes continued for about a week when we found out the next door neighbor had been found dead in his basement with a broken neck. He had been dead for over a week. He had fallen down the steps and on the way had tried to stop himself by grabbing the rough stone walls mutilating his hands as he fell. I don't want to speculate, but she stopped screaming about him shortly after he was found. Just food for thought. Great article!
September 12, 2011 at 9:42 AM

Jessica Penot said…
Wicked... I have heard that arguement and that is an amazing story. I've even heard some people say that hallucinations are just windows into another world. Either way, I think medical treatment is the best response, because it causes a lot of suffering and that suffering can be helped. Why suffer with seeing things like that if you don't have to?

Pale said…
"Many sane and normal people describe paranormal experiences and once mental illness and natural phenomena are ruled out, the alternative has to be considered, and maybe that is the most terrifying possibility of all."

Indeed. Imagine being misdiagnosed as mentally ill when something else was going on.

My medium friend that worked on a lot of challenging, negative cases often commented on the difficulty of telling one from the other (no so much for him, because he developed an instinct, but for families and health pros who just wouldn't otherwise entertain 'bizarre' 'alternative' diagnoses). He would say that institutions often contained people who were misdiagnosed and so these locations could be places of high activity ... even lingering after the buildings or land were converted for other use. I can think of one such place in our neighborhood ... reputedly haunted. Abandoned for years, ~if~ there was something paranormal going on there, it might have been made worse yet by people interested in occult practices gravitating toward those grounds. It's now being turned into land for a subdivision. Interesting to think about the possibilities. :)

Great post. How rare are professionals who are willing to consider the unconventional possibilities when the usual diagnoses fail? Have you known any besides yourself? Have you ever read M. Scott Peck's People Of The Lie? I have a copy, but I can't quite bring myself to read it (even beyond the fact that I am short on time and have more pressing reading material on my list).

Jessica Penot said…
PaleMother: I think professionals who are willing to consider unconventional possibilities are very rare. It is completely frowned on and I don't even discuss it in my professional life. I haven't read Peck's People of the Lie. I'm familiar with it, but I haven't gotten around to it yet. I'll let you know if I do.
September 12, 2011 at 12:58 PM

Little Gothic Horrors said…
This was a really interesting and thought provoking post, Jessica. For me, it always boils down to keeping an open mind, which is, in my opinion, the only way to find the truth.

I have to say, this made me think of 'Twin Peaks' and the storyline that suggested that people with multiple personalities were really possessed by inhabiting entities. Of course, it was just fiction, but I was always fascinated by that concept in accounting for certain mental illness.

Jeffery said…
Good one Jess! Nice to read something intelligent and honest for a change. I agree with you 99.99%,I just don't see that the prospect needs to be terrifying. Aside from the horror of misdiagnosis and maltreatment of patients. If we could remove cultural,social and religious bias from what should really be a field of science there would be a lot less grief in the world. That raises the point though! Who do you call on for help with the treatment, A Priest or a Quantum Physicist. Scientific criteria needs to be adopted and applied for our benefit and not smothered by empirical fears of the ignorant.
Positive comments and feedback would seem to back that up, which is great!
Cheers!
September 12, 2011 at 6:40 PM

Scared said…
I think it's great that you bring up a touchy topic like this. The brain is very, very strange (stranger than Black Stick Men, I bet) and people with problems deserve the best help they can get. Maybe in the end, it doesn't matter if we call the problem paranormal or psychological.
September 12, 2011 at 10:47 PM

Jeffrey: I think who you would call for treatment would depend on the person. Sometimes I think patients really need spiritual guidance and you have to decide who to call based on their spiritual beliefs.

Julie Ferguson said…
My friends daughter suffers from schizophrenia. It has not be easy on my friend dealing with this disease. Good post...
September 14, 2011 at 8:05 AM