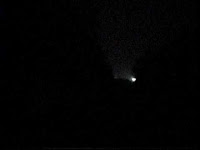 Some settings lend themselves to ghost stories.  The swamps of Louisiana, Southern Mississippi, and Alabama seem to call to ghosts with their moist, muddy fingers.   The lonely castles of old Europe whisper of secret histories that feel like a sanctuary for ghosts.  The darkened streets of Chicago with its history of mob rule and murder, bring to life the ghosts of all those that have died there in fire and tragedy.  And to the North, the icy landscape of Canada brings to mind ghosts lost in fog and snow.

The Ghost Train in Saskatchewan is one of the most famous ghost stories in Canada.   Saskatchewan is one of the warmer provinces of Canada.  It receives more sunlight than any other province and its summer temperatures can be almost as high as the temperatures in the United States.  This warmth doesn't stop St. Louis, Saskatchewan from being home to a famous ghost train, however.    In 1929, a CNR engineer was checking the train tracks by St. Louis.    He was taken by surprise and hit by a train.  He was lost in the headlights of the train and his ghost is said to wander the tracks to this day.

A multitude of people have described seeing ghostly lights by this stretch of track for over 80 years.  These lights are attributed to a phantom train that has been brought back by the dead engineer's ghost.  Late at night, travellers and explorers who stand by the track can see lights coming down the tracks and then vanishing into the mist.   These lights have been described by skeptics and believers and have even been caught on film.   Nonbelievers look for some earthly cause to explain the lights, but many say this will never be found.   The ghost train comes in the night and for many the only explanation imaginable is that this stretch of track is haunted.
Email Post
Labels: Canadian Ghosts Ghost Trains

Jeffery said…
I'm very fond of trains! And Ghosts!..Even better when you give me both,better still when it stymies the skeptics. Those are my absolute favourites.
Cheers Jess!
September 8, 2011 at 9:25 AM

wicKED said…
Great post! How odd that we would both post about train related haunts on the same day?
September 8, 2011 at 10:59 AM