The Possession of Joseph and Theolbald Bruner 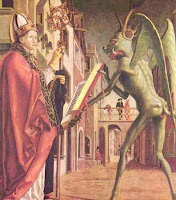 Most cases of possession can ultimately be explained by medical and psychological causes, but in some cases there is no easy medical answer and the supernatural is the only reasonable answer.  The case of Joseph and Theobald Bruner was a a tragic one that baffled all the medical professionals of the time.   Their case is one of the most striking and violent cases of demonic possession ever recorded.  The records of the local priest say that the possession began when both boys began drawing pictures of devils and demons on the walls in their bedroom.  They would whisper to the demons at night and treat them as friends.   Shortly after, the boys began going through terrible physical contortions.  Their limbs would lock together in unnatural positions and they couldn't be unlocked.   They would arch their backs backward in impossible positions and speak in languages they had never heard.

The symptoms became worse with time and eventually their bodies would begin to bloat.   Shortly after the bloating, the boys would vomit a lovely mixture of foam, feathers, and seaweed.   They vomited all manner of things they had never eaten and many of the objects they vomited weren't even available at the house they lived in.  The boys were constantly covered in seaweed and feathers and vomit no matter how often they were cleaned. Their beds levitated and objects in the room around them were flung about inexplicably.  The boys also gained psychic abilities and were able to predict the deaths of people in the village.  The boys parents eventually sent the boys away for the exorcism ritual and spent the rest of their lives at the St. Charles Orphanage.  During their stay at the orphanage they told the nuns that they were "The Lord of Darkness."  It took four years to exorcise the boys, during which time they lived in constant torment

Even after the exorcism, there was no happy ending for the two cursed children.  One boy died shortly after the exorcism at the age of 16 and the other boy died at 25.   The case of the Bruner boys still baffles people to this day.   Assuming that the priests and witnesses weren't lying, no natural explanation for what happened to the Bruners has been found.  If their case wasn't an elaborate hoax perpetrated by an entire village, orphanage, and the clergy,  it is one of the most conclusive cases of possession.
Email Post
Labels: Cases of Possession Demonic Possession Joseph and Theobald Bruner The Bruner Possession

Jeffery said…
This one is a fascinating case! It's in William Peter Blattey's research notes for his book The Exorcist. I must admit Demonic Possession is a long way from ghostly manifestations though, and way beyond my understanding..Such a tragedy for there family too..
Here's a link to Blattey's Fan site if you're interested..
http://theninthconfiguration.com/
August 7, 2011 at 8:27 AM

Jessica Penot said…
Thanks... I actually read that book too. It was very good. I haven't been to his fan site yet so I'll take a look. I didn't even know he had one! Possession is a bit far from haunting, but I put demonic hauntings and possession in the haunting category because many demonic events seem like haunting. I always think the Haunting on Larabee Street was a demon too, but most still consider it a haunting. It is a fine line.
August 7, 2011 at 11:09 AM

Jeffery said…
I don't have my books handy but I'm pretty sure this case is mentioned in the Encyclopedia of Demonology as well. Wouldn't it make a great case for the CSI team!...Cheers!
August 7, 2011 at 6:19 PM

Jessica Penot said…
Jeffery... I don't have the Enclyopedia of Demonology. That sounds interesting as well. I'll have to look it up on Amazon.
August 7, 2011 at 8:23 PM

Jessica Penot said…
Pam... I haven't been able to comment on your blog in forever. My computer has locked me out. Thanks for the comment.
August 7, 2011 at 8:24 PM

Justine’s Halloween said…
Woah. That's a pretty freaky story that I'm unfamiliar with. You're right - If this didn't happen, a lot of people had to be lying! I'm a little up in the air about whether possessions exist, but the idea of this happening is scary. The Exorcist is the scariest movie of all time in my opinion!
August 7, 2011 at 8:32 PM

Jessica Penot said…
Justine... I agree. The Exorcist was the scariest movie ever and I think this case was used as one of the referrences for that book.
August 8, 2011 at 1:41 PM

Little Gothic Horrors said…
Yikes! This story is fascinating but also deeply disturbing. Some of the symptoms that the boys displayed did remind me of 'The Exorcist', so I'm not surprised that you say this case was used as reference.