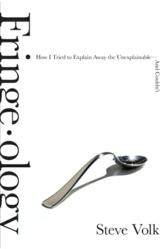 Fringelology is an exploration of the paranormal by award winning journalist Steve Volt.  Steve Volt explores the world of the paranormal with a cautious eye in this fun book.  The book covered a lot of ground and explored a wide range of the paranormal.  Volt started with a unique hypothesis.   He set out with the argument that the study of the paranormal is polarized and biased to the point that it is almost never regarded in any kind of  real fashion.  He argues that there tend to be three groups and that all three groups are so passionate and furiously biased that they can't even really look at the subject of the paranormal in an unbiased light.  He lists these groups as skeptics, religious folks, and paranormal true believers.  He says the skeptics tend to lump religious and paranormal together and will defend the most unlikely natural explanation  before even thinking about a paranormal explanation.  The religious people tend to view the paranormal as the dark arts and the true believers in the paranormal will fight to believe any paranormal event no matter how unlikely it is to have occurred.   He is most passionate about skeptics who he believes are irrational in their closed mindedness.  He neither endorses nor argues against the paranormal but rather says that we should study it with he same objective, open mindedness we do any other occurrence rather than say faulty plumbing is the explanation for every phantom noise when it couldn't possibly be faulty plumbing.

Volt then presents a number of interesting chapters which cover various aspects of the paranormal.  The chapter called Death and Not Dying was the most interesting to me as it covered Elisabeth Kulber-Ross's interesting journey from being the authority on death and coping with death and grieving into a world of near death experiences and the paranormal.  Her journey is riveting.  Other chapters discuss UFOs, lucid dreams, ghosts, telepathy, and communicating with the dead.   Volt's usual way of exploring these topics is to pick a respectable scientist who has studied or been involved in the study of said subject and explore their findings, life, and opinions.

Overall,  I love this book.  It is well written and covers a lot of ground that has never been covered.  I couldn't put the book down.  I like Volt's argument that the paranormal should be study objectively and I believe he does an excellent job supporting this.   Volt is a good writer and his style made this book a quick and easy read.  However,  I am nit picky and Volt spent a good deal of time with psychologists and psychiatrists.   It did bother the hell out of me that he couldn't seem to keep the two straight.  Kubler-Ross is  a  psychiatrist.  She went to medical school.  Psychologists don't go to medical school.  We aren't MDs.  Throughout the book he called her a psychologist so often I didn't know in later chapters when he talked about psychologists if he was really talking about psychologists or psychiatrists.  This is important because psychiatrists study the medication end of the field, while psychologists are more mired in research and talk therapy.    He also presented new theoretical ideas that groups of psychiatrists or psychologists (I can't tell) dreamt up and presented them as actual diagnoses followed by statements that diagnoses aren't  real.   Just for the record,  according to the international medical community diagnoses are real and help to treat people who are sick.  For example, diagnosing someone with schizophrenia helps find the proper treatment for them.  In order to be a real diagnosis to be considered real,  it must come out of the DSM or ICD (the most current revision) and have a code and have been agreed on by an enormous panel of professionals.  I can't just dream up farting monster syndrome write a paper about it and call it a diagnosis.  It would take years of study and tons of support and research by more people than me to make my farting monster syndrome a working diagnosis that I could bill for.  Volt was similarly weak in his explanation of  the placebo effect, which he described as close to paranormal.  I won't explain why, because that would probably annoy everyone but me,  but there are oceans of data explaining why the placebo effect occurs and none of it is paranormal.  Volt also ignored theories on poltergeists that attribute them to one person when he described his house as being haunted by a poltergeist.   I could go on like this with other nit picky points of science and medicine and the paranormal for pages, but I'll stop here and say that had Volt been a little more careful in these types of details I would say his book is up there with Spook as one of my favorite paranormal books.  Volt managed to collect some really fascinating paranormal stories and tie them together with a brilliant writing style.  For me the devil may be in the details, but perhaps I am being too harsh.  To the normal reader who isn't a psychologist  these details would be lost.  The flow of the narrative and the structure of the book would be more pronounced and Volt certainly tells many good stories of those fighting for a scientific regard for paranormal subjects in a world than generally gives them as much regard as unicorns and fairy god mothers.
Email Post
Labels: Book Reviews Fringeology Paranomal Books Steve Volt

Lewis Powell IV said…
Thank you for your insightful comments, I'll definitely add this book to my wanna read list!
August 3, 2011 at 6:09 PM

Jeffery said…
Sounds interesting! And I agree with you that any researcher in this field should stick to clear scientific methodology. In Chinese Medicine Diagnosis is a balance between physical symptoms and psychological state yet that doesn't bode well with Western methods either out of arrogance or snobbery. I believe the same is true of paranormal research sadly.
August 3, 2011 at 6:42 PM