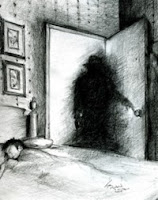 Shadow people are human shaped forms that can be seen out of the corner of your eye at almost any time.  They are dark and move quickly, and when you turn to face them, they vanish into the ether.  Occasionally, shadow people have been described as moving forward or interacting with people, but usually they don't interact with the observer at all.   Shadow people seem bound to the peripheral vision.  Shadow people are often linked to a feeling of dread or horror and are commonly believed to be malevolent spirits or ghosts.  They  are sometimes caught in pictures and are almost always said to be negative entities.  Hundreds and thousands of people tell stories of shadow people and the terror they associate with be haunted by shadow people.  Mythology is filled with stories of these shadow people.  There is even a website cache dedicated to nothing but shadow people stories, but what are these shadow people really?

There are also many scientific explanations for the presence of shadow people.  The human ability to perceive their environment is enormously complicated and one of the most complicated neurological processes we possess is the process of interpreting things we see only partially.   People are capable of seeing only a small fraction of an object and filling in the blanks to understand what the complete object is.  Although this seems natural and simple to us,   it requires and enormously complicated series of neurological and psychological events to achieve this ability.   It is also common for people to use this ability unconsciously, especially when viewing objects out of the corner of their eye in their peripheral vision.   For example, it isn't uncommon for someone to see part of a lamp post  out of the corner of their eye and think it is an animal or a person.   The mistake is quickly rectified when the observer turns to inspect the item.   The observer initially only saw a small portion of the object and the mind automatically filled in the blanks, falsely.   The same thing could be possible with shadow people.  A shadow or passing darkness could be seen out of the corner of the observer's eye and the mind could easily and falsely interpret it as a human shaped monster.   This would explain shadow people's quick movements and the fact that they are always seen out of the corner of the eye in the peripheral field of vision where perceptual errors most commonly occur.

However,  for those who have and do encounter shadow people on a regular basis, these scientific explanations will never fully account for the terror and dread that is associated with an encounter with a shadow person.  So for now,  the complete explanation behind shadow people remains hidden in the shadows from which they emerged.
Email Post
Labels: Shadow Beings Shadow Folk Shadow Men Shadow People

Tim Kent said…
Great post. A good friend of mine see's shadow people all the time. He is a very paranoid individual which might explain why he see's something like a monster when a shadow passes. Very neat.
July 31, 2011 at 6:58 PM

Jeffery said…
Aside from being a cool David Bowie song..Shadow Man, there's also a Germanic or Norse version called the Alp...This ones considered Vampiric and somewhat of a sexual predator..There's also an elite group of modern Gothics who go by that name as well, Artists and Musicians, Doctors and Lawyers playing on the fringes of the Occult..Hehehe Between the Black and White is always the Grey!...Cheers!
July 31, 2011 at 8:11 PM

Lewis Powell IV said…
Great article! I had an experience with what I think may have been a shadow person, but I was looking directly at the figure. It walked past a doorway. I wasn't frightened and not negative ever came of it. Of course, I may have just been seeing something else that my mind interpreted as a figure.

Courtney Mroch said…
I've had a couple of shadow people experiences. This was a neat look at it. I LOVE the picture you included at the top of the post. I wish I could find one like it for the cover of my book about Shadow People!
August 1, 2011 at 6:43 AM

Jessica Penot said…
Tim.. I'm sorry your friend sees shadow people all the time. That would be very scary.

Jeffrey... I'll look for the David Bowie song and the band. Thanks.

Courtney.. I didn't know you were writing a book about shadow people!! Please tell me when it comes out. I can't wait.

Pamela K. Kinney said…
Seen shadows over the years. Last one was on an investigation in January 2011 when my partner and I were doing EVP session by graves of these Northern Civil War soldiers and I turned to my right and a man-shaped shadow taller than me walked past and dissipated. The shadow had a white eye that looked at me!
August 2, 2011 at 4:52 PM

Jessica Penot said…
Adsila... I think that is the way most people see the.

Pamela... Seeing that kind of detail is extraordinary and terrifying
August 6, 2011 at 7:38 PM

theKlatz said…
fwiw, Ive seen tons of shadow people and not once had a bad experience because of it, just sayin'
August 8, 2011 at 5:17 PM

Anonymous said…
they are also called shadowshifters, and they are not dead people, they are the soles of the shadows. i am one of them...
August 15, 2011 at 4:25 PM

Anonymous said…
i beleve that at times the veil between our dimention andone that contains s,p.and oter entaties is week some places are alwayes week alowing elamentals to enter .aloud bang that shakes your home LOOK QUICKLY CAREFULLY this is when we see full body s,p.they pass more easly through anopening or crack can turn in to acomet shape that is almost quicker than the eye, good luck and god bless if you have these. visited
February 22, 2013 at 10:01 PM