The Remains of American Adventures

One of my favorite blogs is Above the Norm, http://above-the-norm.blogspot.com/.  This blog features many photos of forgotten and abandoned places.  They are both beautiful and haunting.  I thought of this blog when I went to White Water in Atlanta with my children this weekend.  Oddly, the entire water park seems to be surrounded by an abandoned amusement park.  Old rides, thick with ivy, surround the park.   Abandoned buildings sit in the parking lot speaking of forgotten places with sad stories.  It seemed to me an odd place to have a water park, next to the skeletal remains of a dead amusement park, but the story is simpler than it seems.

Wikipedia described the history of this dead park in one brief paragraph:   "First opened in 1990, the American Adventures family entertainment center operated next door to White Water, even using the same parking lot. This facility included a number of common carnival rides and other attractions geared towards families with small children. While the park was a separate gate from White Water, the two promoted each other often, to the point of having a connecting pathway between the two park entrances. When Six Flags acquired White Water in 1999, American Adventures was included in the purchase, and the park was considered one of Six Flags' minor parks. However, in May 2008, the park was leased to a new operator, Zuma Holdings, which no longer co-branded the park with Six Flags White Water. In 2010, American Adventures closed its doors for good, citing "circumstances beyond our control." 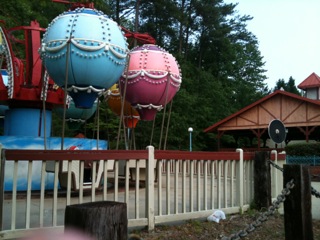 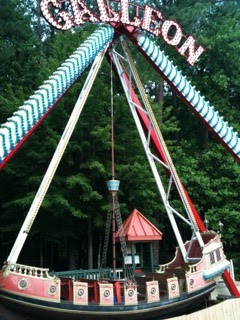 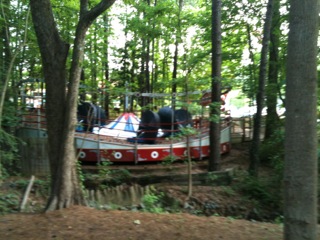 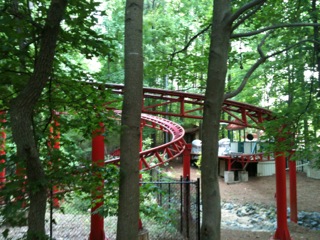 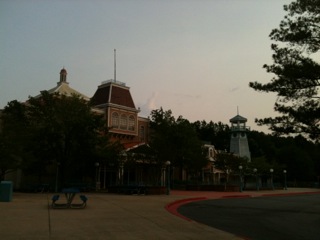 Julie Ferguson said…
Thanks for the mention. I definitely would love to go there and take tons of pictures. I haven't been to an abandoned amusement park yet.
June 8, 2011 at 8:29 AM

Anonymous said…
I love abandoned places. I find them extremely fascinating. Thanks for sharing the link!
June 8, 2011 at 8:35 AM

Chris 'Frog Queen' Davis said…
I saw an abandoned six flags when I was in Louisville. I wish I would have had time to grab some cool pics like this.

Thanks for sharing...these are fantastic.

Pam Morris said…
it always looks so lonely and forlorn at these places when they're abandoned. guess it's because there used to be lots of people having fun and laughing and now they are just eerily silent. cool pics!
June 8, 2011 at 2:39 PM

Anonymous said…
great photos! i was expecting to see an older amusement park, but it's from today. it's still pretty weird to see an empty amusement park.
June 8, 2011 at 6:38 PM

-Lou said…
This is a really cool post. It will be interesting to see how long it is before the simple explanation begins to fade and a more exotic urban legend takes its place.
June 11, 2011 at 9:34 AM

Anonymous said…
Makes me somewhat sad to see, as I remember what it was like when it was open. I spent many summers there as a child and it was always packed - booming music, carnival sounds, colorful lights etc. It's haunting and sad looking now, but it was amazing when it was open...
June 16, 2014 at 10:12 AM

Anonymous said…
I too grew up proximal to the park and my parents brought me there more thab anywhere else. It was a park geared to young children. Without the roller coaster at American Adventures, I NEVER would have ridden on any other coasters.its the only "gateway" roller coaster I know about, and it is incredibly sad to walk past the park and see it so desolate. Its funny that I found this post about it because when I stop to look at it I hear the distorted carnival music of eeri movies in my head along with distant shouts and laughter of small children. It adds to the slight disturbing feeling that the park looks almost as if it were abandoned very abruptly in the middle of an operating day. And to remember what used to be inside the building instead of that stupid foam factory, there was a massive carousel, and a series of old looking toys or something like that. There used to be this stand with bubble solution and a hula hopp aroubd it, you would stand in the middle and pull a giant bubble up around your whole body It was an amazingly magical place, and I am heart broken that I wont be able to take my kids there.
December 5, 2015 at 7:22 PM

Unknown said…
Wow.. Memories! I came here twice a week every summer, for about ten years.. Can't believe they are closed down. The place looks the same, but, I'm sure it looks even more haunted now! I would love to come back here and look at everything! Too bad I live in Chicago now. Lol. This was one of my absolute favorite field trips!
December 7, 2015 at 8:41 AM

Unknown said…
Wow.. Memories! I came here twice a week every summer, for about ten years.. Can't believe they are closed down. The place looks the same, but, I'm sure it looks even more haunted now! I would love to come back here and look at everything! Too bad I live in Chicago now. Lol. This was one of my absolute favorite field trips!
December 7, 2015 at 8:42 AM

Unknown said…
So many memories at this place. I want to go see it now that it's abandoned. Does anybody know what rides remain there? I remember the roller coaster and the ship were my favorites.
May 23, 2016 at 10:52 PM

Unknown said…
So many memories at this place. I want to go see it now that it's abandoned. Does anybody know what rides remain there? I remember the roller coaster and the ship were my favorites.
May 23, 2016 at 10:56 PM

Anonymous said…
I worked at AA the summer of 1993 (Almost 25yrs ago. Holy s***). That place created a lot of great memories. Sad to see it become a completely different type of tourist attraction.
January 5, 2017 at 9:39 AM

Unknown said…
Does anyone know if there is someone we can contact to enter the theme park to photograph it or has anyone entered it on their own? This would be an awesome place to take some spring family photos!
February 21, 2017 at 7:46 AM

Anonymous said…
One of my all time favorite amusement parks ever! Great memories of birthday parties there & all the rides. My kids loved it.....please bring it back, please & pretty please.
March 27, 2017 at 10:52 PM

Unknown said…
Went there a few days a week every summer from 1992-1998. I remember playing a lot of Mortal Kombat 2 in the "Penny Arcade" with a crowd of people hovering around the cabinet while others would place their quarters up on the marquis saying "I got next!" I miss old school arcades. Nowadays when you enter an arcade all you see is ticket redemption machines. It's jusy sad.
May 21, 2017 at 5:58 PM

Stephanie Lawson said…
Was at White Waters today and I was reminiscing about the days when I brought my now 25 and 22 to American Adventures. We loved that park.
July 22, 2017 at 4:48 PM