The Ghost of Six Flags 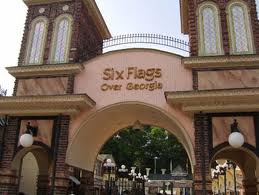 Everyone has heard of six flags.  Throughout the country,  these parks are known for there thrilling rides that become increasingly more terrifying and death defying.  This year when we went to Six Flags in Atlanta,  we found a roller coaster that goes straight up at a 90 degree angle and descends at the same nauseating angle.  There was a roller coaster that puts you on your stomach, like superman, and twirls you around.  There is ever manner of terrifying ride, but the rides are not the only horrifying thing at Six Flags, Atlanta.
Just a little bit of research into the Six Flag theme parks reveals that death seems to linger around these amusement park like a grim specter.   Here are a few examples of some of the deaths and injuries that occurred at Six Flags:
*On May 11, 1984, eight teenage visitors were trapped and killed when the Haunted Castle attraction was destroyed by fire.
*On June 17, 1987, a 19-year-old woman died after falling from the Lightnin' Loops shuttle loop roller coaster.
*On June 28, 2008, a 17-year-old male was decapitated  by a passing train  of Batman the Ride in Atlanta after he hopped two six-foot fences and entered a restricted area. Initial reports said that the victim was allegedly trying to grab the feet of a rider as the train went by; later reports said that the victim was merely trying to retrieve a hat.
*On July 18, 1989, an 11-year-old boy became unconscious while riding Z-Force. Park staff performed CPR, but the victim was pronounced dead after being taken to the hospital.

If you enjoy these stories, wikipedia has an entire page dedicated to deaths and injuries at the Six Flag amusement parks.  Some are clearly caused by the stupidity of the guests, others are caused by park problems, but the sheer volume of them makes them an interesting read.
Strangely, the ghost of Six Flags in Atlanta doesn't have an origin story.   Most haunted amusement park ghosts have a back story.  The Disney ghosts all died somewhere near the ride they haunt and you would expect the same of Six Flags.   However, the ghost of Six Flags is just a little girl.   She is said to wander the park looking for the lost and lonely.  She picks them out of the crowd and asks for help.   The hapless victim inevitably tries to help the little girl.   She leads them into the woods around the park and when the victim turns the girl vanishes leaving the victim somewhat lost and completely confused.
I didn't see any ghosts when I went to Six Flags, nor did I see any death or mayhem.  All I saw was happiness and sunshine and several teens vomiting in the trashcan after a particularly nauseating ride.  It is interesting to think, however, that behind the screaming crowds a little girl ghost wanders forever searching for her next victim.
Email Post
Labels: Amusement Park Ghosts Atlanta Ghosts Georgia Hauntings

Pam Morris said…
heard of the 'accidents' at six flags but had no idea there was a ghost. would love to be able to find out why she lingers there.
June 13, 2011 at 7:20 PM

Anonymous said…
There used to be a store in the back of the parking lot, close to the end where Chattahoochee River is. She is said to haunt that area. She is the ghost of a child that was killed in a car accident close to where the store (gas station) used to stand. Now she appears in all white and tracks down unsuspecting visitors. Creepy!!! The spot where the store stood looks a bit different now. But it definitely looks like one stood there back in the day.
October 22, 2016 at 4:06 PM

Unknown said…
Little girl at 6 flags Atlanta is a little girl who was ran over at the far end of the park where the gas station use to be in the parking area. It's said that her parents stopped there for gas. She got out of the car unknown to her parents. She was ran over while looking for her parents.
June 11, 2017 at 5:42 AM