The Black Lady of Opryland 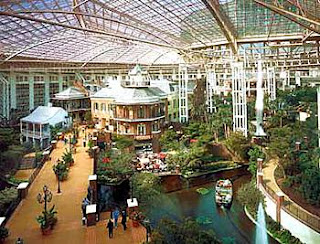 I've lived in the South for a good while.  I've lived here long enough to remember when Opryland was a theme park with short lines and a kennel for your dog.  Those days are gone now and the once popular amusement park was transformed into an outlet mall and enormous hotel.   The outlet mall is called Opry Mills and the hotel has become a destination in and of itself.   It is a kind of indoor city.  In the winter it is filled with ice sculptures and people come from all over to see this enormous indoor wonderland.

It is not surprising that a place this big and well known would have its fair share of ghost stories.  The most famous ghost in Opryland is known as the black lady.  Unlike many of the other Opryland ghosts, she has been seen all over the hotel and even in Opry Mills.  She is always dressed in black from head to toe and is said to be a young woman.  She wears old clothes that look antebellum in style.  She's described as wearing a long black veil that somewhat obscures her face.  She is usually seen at night and tends to cling to the dark places.

One cleaning crew saw the black lady and were so terrified that they called security.  The entire team said they saw the black lady hovering above the floor.  Another employee quit after having an encounter with the black lady.  Author Christopher Coleman believes the black lady may be the ghost Mrs. McGavock.  Her family once owned a glorious mansion and the land around it.  That land is now the location of Oprland and Opry Mills.  Apparently, the black lady bears a striking resemblance to photographs of Mrs. McGavock and the ghost could be easily linked to the land she once loved.  Whoever she is, the black lady still wanders the grounds today, scaring all those who wander the area at night and reminding them that the land is older than what now stands on it.
Email Post
Labels: Nashville Ghosts Opryland Ghosts

Lewis Powell IV said…
I'm curious as to precisely which Mrs. McGavock she is...I pulled my copy of Coleman's book and he doesn't specify.

It is interesting that this family does tie this location with Carnton Plantation in Franklin, which has been deemed, "the most haunted house in Tennessee."
April 19, 2011 at 11:08 PM

Jessica Penot said…
I think reading Coleman's entire chapter on this is worth it and I'm glad you did. There is a lot more going on with this ghost than I posted and with other ghosts at Opryland.
April 20, 2011 at 8:36 AM

Julie Ferguson said…
You can tear down the structures but the ghosts will still remain. Great story...
April 20, 2011 at 9:13 AM

Courtney Mroch said…
That's an AWESOME pic of the inside, Jessica. I think I would've liked it back when it was an amusement park too. But the hotel is fabulous. And you shared an equally fabulous ghost story to tell about Opryland!
April 20, 2011 at 3:41 PM

angiemillsap said…
I worked at the Opryland Hotel in 1993. I saw HER. I even smelled her when I took the night's deposit down to the central bank. She smelled like roses. My manager, Aubrey Locke, was escorting me and he smelled the roses, too. Very strange.

bonnie said…
I stayed there in 2001 with some friends. One night walking down the hall to our room, we felt someone walking behind us, but no one there. Felt like something out of The Shining. Recently looked at some photos taken and there is a white misty area in several of them.
May 20, 2013 at 6:58 PM

Anonymous said…
I work in office building on the Operyland property. I recently have moved seating location and I have been getting rubbed on shoulder, thigh and was poked in arm tday. I turned around quickly no one.
Then i put it all together.. Does anyone have any more history on the land? Thanks
September 13, 2013 at 11:57 PM

Anonymous said…
Personally, I have never seen a ghost, so this all seems a bit out there for me. But, I looked up this location because my wife is a fight attendant, and says that she say an old naked man in her room last night at this hotel. She says that she couldn't move so she closed her eyes, and when she opened them he was gone. Be it a dream, or a real experience, I'd say that is pretty damn frightening either way. Has anyone had a similar experience?

Evo said…
I just came back home I stayed their for a week and for my surprise in a couple of picture you can see in the background in the hall a person standing all dress in black and on another photo you see a bright shadow
April 25, 2015 at 5:47 PM

Unknown said…
I have seen her as well as another co-worker at Skechers store in opry Mills mall. She has walked around back of the store and has sat at our benches in store. Just tonight my co-worker told me she was walking down an aisle when the lady stood in front of her and went down another aisle. She had a veil as well as the full black dress.
August 29, 2016 at 8:48 PM

Anonymous said…
I did not see her, but she woke me at three am a couple nights ago. A woman said “Miss” in my ear while I was sleeping. I refused to look but told her she had to leave.
January 21, 2018 at 6:01 AM

Anonymous said…
She is real and she was in the store that I work in opryland hotel. I told my coworker there was a lady dressed in black going through the clothes and she moved very quickly..she never exited the store its almost as if she vanished the minute I looked aqay!
October 31, 2019 at 4:22 PM

Sarah said…
Hi friends, I am currently working on a story on The Lady in Black and was curious if any of you could contact me with more information on your experiences. Please comment on this thread or if you would like to contact me directly, I can provide an e-mail. Thank you!

ANGIE you said you saw her too, can you tell me about that experience?

BONNIE I am really interested in your pictures you mentioned that have a mist in the background.

UNKNOWN You worked at the Sketchers store and saw her?

ANONYMOUS that worked in the hotel, do you have any more details about her going through the clothes?
September 14, 2020 at 9:51 AM