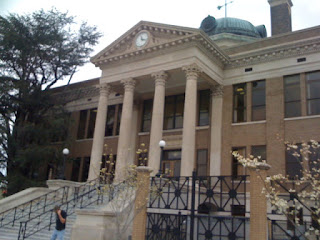 The Drive to Athens, Alabama was petulant today.  Tornadoes are expected and a vicious storm is heading our way.   It is preceded by shadow and wind so strong I had to cling to the steering wheel to keep the car on the road.   It was worth the drive.   Athens, Alabama is that kind of quiet, small, Southern town that belongs in old movies and books.   The old courthouse sits surrounded by a square of historic buildings and old churches.  Even in the shadow, it is alive and is the hub of life in Athens, Alabama.
I couldn't find much on the history of the old courthouse.   Athens was one of the first counties in Alabama to get a courthouse and claims to be the oldest county in Alabama.  The land for Limestone county was ceded from the Cherokee Nation in 1806 and from the Chickasaw in 1816.  For obvious reasons, for many years settlers had to fight off the Natives of the area.   Athens was made county seat in 1818 and during the civil war it was the first county in Alabama to be occupied by union forces.   Athens and the courthouse were sacked and burned.   The Col. responsible for the sacking was court marshaled the behavior in Athens was so terrible.

According to courthouse staff, there used to be a prison on the third floor of the Athens/ Limestone County courthouse.  This is where all the haunting activity is usually said to take place.   Locals say that one of the prisoners hung himself in his jail cell many years ago.  They don't know if he was sorry for what he did or just sorry to be paying the price for it, but he couldn't see the point in living any longer.  He hung himself on the third floor of the county courthouse and his ghost has never left.   Employees didn't have any specific stories for me.  They just knew the story and knew the third floor was haunted. 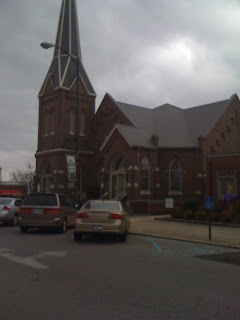 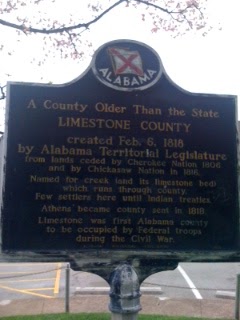 Gummerfan said…
Yep, you did pick a nice day for a drive! I used to deliver to the courthouse years ago at one of my old jobs. There was an old man with a shoeshine stand there.
Sounds like you had an interesting trip!
April 4, 2011 at 2:19 PM

Jessica Penot said…
I hope you faired well in the storm! I heard there was some damage in your neck of the woods!
April 4, 2011 at 4:51 PM

Stacey Lang said…
I don't know buildings built in Limestone are often associated with creepiness. And whenever I visited the city hall I sometimes get the creeps, which is unusual for me.
October 4, 2011 at 12:53 AM