The Demon in the Dark 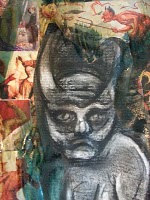 Last year at this time I was hard at work on Haunted North Alabama.    I did numerous interviews with people to try to get interesting ghost stories.   I got one of my favorite stories from a young woman who lived in Huntsville.  I couldn't post it on my blog at the time because I had to save it for the book, but this story had a deep impact on me.  The young woman who told me the story just wanted to be heard.  Most people didn't believe her when she told them her story, so she had stopped talking about it.  Her husband believed her only because he was there, but he didn't like talking about it.

The young woman told me they had just purchased their dream house.  It was everything she ever wanted, but from the beginning the house was just wrong.  Even as she unpacked, doors opened and closed.  Things moved around.   She was so happy to be in the new house, she ignored these things because she loved the house, but one door in particular kept opening every time she closed it.

Time passed and her husband worked the night shift so she ended up alone in the house all the time.   At first, there were noises.   The noises grew and sometimes light bulbs would explode when the light was turned off.   The young woman called an electrician and the electrician explained there was no way light bulbs could just explode with no current.  The young woman became afraid of the house.  One long night, she heard something in the spare room and went to explore.  As she walked into the room, she saw a dark shape curled up on the floor.  Just as she saw it, the light bulb exploded and the room was bathed in darkness.   The young women went to spend the night with her parents.    The young woman changed her entire life she was so afraid.  She only stayed at home when her husband was there.   One night, her husband heard the noises too.   He got up to investigate and found every light in the house turned on and the television on.  He couldn't explain it, but when he crawled back into bed the noises began again.  He described the noises as sounding like there was a party in their living room.   After that night, he agreed that they had to leave the house.

Things got worse for the young woman.   She began having nightmares and she woke up with claw marks on her back.   She had three long, deep gashes running the length of her back.  There was no way she could have done this to herself.  Every morning she woke up with more injuries.  Finally, they were able to move.   they left the house and the haunting ended, but the young woman said she still was afraid to sleep.  She was still afraid to be alone.  The demon that had haunted her in that house had left her with scars that went deeper than the flesh.

I went to find the young woman's old house after the interview and I found the house had fallen into disrepair.  It was a plain little house with nothing to distinguish it from the houses next to it.  The windows were broken and covered with cardboard and although there were cars in the driveway no one answered the door.   None of the neighbors would comment on the new or past residents of the house.
Email Post
Labels: Haunted North Alabama True Ghost Stories

Anonymous said…
that must of been quite terrifying! any history on the house or the ground where the house was built?
March 16, 2011 at 2:19 PM

Jeffery said…
Interesting M'lady although not unique, I wonder if it's part of a pattern. The story from California in the link runs somewhat parrallel to your research.
http://www.haunted-places.com/truelife.htm
March 17, 2011 at 2:22 AM

Anonymous said…
I think she may have been lucky as far as the evil entity not following her to her new location. I have read and heard that sometimes they do follow one to a new location.

I can only imagine what she must of went though. I know if something like that happened to me I would have trouble sleeping at night.
March 17, 2011 at 1:13 PM

Jessica Penot said…
Marbella.... I couldn't find anything in the history of the house, but that doesn't mean it isn't there. Some of these histories are forgotten on purpose.

Bear... Great link. Thanks! I've heard of other stories like this, but it was deeply touching to hear a first hand account.

Sananotniohauntings.. I've heard of these things traveling too. I'm very glad she was able to leave her demon behind. I don't think she could have taken much more abuse.
March 17, 2011 at 1:45 PM