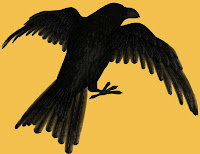 Anyone who has ever read Edgar Allan Poe's The Raven knows that there is something terrifying about a ghoulish bird.  Birds can be somewhat frightening to begin with.  They loom over us and stare out at us with glowing eyes.  The very sound of an owl late at night can bring to mind old ghost stories and whisper of childhood fears.  At the Lincoln Inn in London, such fears are justified.

Lincoln's Inn is in the center of legal London. It is not an inn as Americans define inns. It is one of four Inns of Court in London to which attorneys are called to bar.  It has a long and dark history that lends itself well to stories of ghosts and hauntings.  Lord Antony Babington was convicted of trying to assassinate Elizabeth 1st in 1586 and he and his followers were hanged, drawn and quartered at Lincoln’s Inn.  Lord William Russel's notoriously grisly execution also took place at Lincoln's Inn.

According to legend,  a group of young men were attacked at the law offices of  Lincoln's Inn in 1913.  The young men were accosted by a giant bird.  The bird cast no shadow and when the assault was over one of the young attorney's was left dead.  Charles Appleby was found covered in claw parks and drenched in blood.  A few years later another young man, John Radlett, was found hanging in the same office. The young man had locked himself in the office and huge claw marks were found on the walls and the doors of the office.    Rumors of the phantom bird spread quickly after this and the two journalists decided the story was worth investigating.  They locked themselves into the haunted room and began their investigation.
At first, nothing happened.  In fact so much nothing happened, the investigators began playing cards and wrote the story off as local legend and folklore.   It was only when the men were relaxed that the bird struck.  The windows were flung open and the room was filled with a sound of great flapping.  The doors shut and claw marks could be seen across the floor of the haunted room.  Shortly after this, the building containing this cursed room was destroyed and the bird vanished with the building, but the story is still one of the most terrifying haunted bird stories I have heard.  It would make Alfred Hitchcock shiver.
Email Post
Labels: Animal ghosts Bird Ghosts ghost stories

Heart Centered Psychic said…
I was unsure about whether I wanted to read or not; having been to the Tower of London and having the ravens follow me and look me in the eye. A bit disconcerting and caused me to miss most of what the guide had to say.

I agree it would be a great movie; and yes... Hitchcock's movie was frightening!

Flu-Bird said…
The Bird of the Lincoln Inn would make a great movie providing its not some enviromental message film
September 30, 2017 at 9:37 PM