The Haunting of Snow Hill Inn 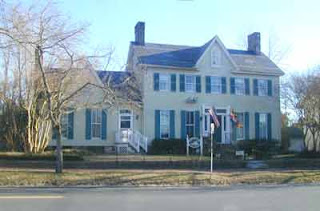 If I were a rich woman,  I would have bought this house.  Snow Hill Inn is located in Snow Hill, Maryland and until very recently it was for sale.   The Inn at Snow Hill has been many things.  Its been a post office, a doctor's office, an apartment building, and an inn.  It is a beautiful colonial style house surrounded by trees and painted a cheerful yellow.  It is picturesque and welcoming.  It is perfectly pretty and utterly haunted.

The Snow Hill Inn was built in  1835.  In 1870, the town doctor bought the house and converted it into his home and office.  The doctor was a good doctor and was well known for his bedside manner and gregarious nature.  The doctor was beloved, but his son was never happy.  Many believe that his son was upset because he was failing pharmacy school. On December 14, 1904, the young man slit his own throat.  He left a note behind, but his throat was slit three times and this is a very improbably and uncommon way for someone to end their own life and some believe that the young man may have been the victim of foul play.

Whatever his cause of death,  the day after the young man died the house keeper at the house in Snow Hill reported hearing  groans and the sound of someone falling.   Since that time numerous people have lived in and stayed at the house in Snow Hill.   Innkeepers, guests, owners, renters, and many others have all described being haunted by the ghost of the young man.   They have reported lights going on and off on their own, shaking beds, opening and closing doors, seeing ghosts in mirrors, and seeing the ghost standing right in front of them.   The list of paranormal encounters in the Snow Hill Inn goes on and on.   Paranormal investigators have stayed at the inn and confirmed the haunting is real and one psychic says that she spoke with the ghost and he was the young man who did kill himself.

It is a shame someone bought the house, because I was going to put it on Christmas list for next year.  I would have liked to meet the ghost of Snow Hill Inn.  To learn more about this lovely haunting you can read an article on the haunt at http://www.lowershore.net/towns/snowhill/haunting.htm .
Email Post
Labels: Haunted Houses Maryland Hauntings Snow Hill Haunting

Andrea Allison said…
Such a sad story for such a beautiful house. I hope the new owners take good care of it.
January 10, 2011 at 7:58 PM

Pale said…
I agree it's ashame you didn't get to add it to your Christmas List ... what good posts that would have made. :) I can picture you there. You never know. It could become available again. You shhould get to know the new owners. :)
January 10, 2011 at 8:39 PM

Pam Morris said…
a lovely house--sounds like this would be a very sad and genteel ghost...I hope the new owners keep the home looking as it did when this gentleman was alive...
January 11, 2011 at 4:29 AM

Julie Ferguson said…
A creepy haunted house would have been a nice place to buy. I hope whoever bought it appreciates the history of the place and doesn't mind sharing with ghosts.
January 11, 2011 at 11:55 AM

Lewis Powell IV said…
Great story! Thanks...I'm adding it to my hauntings spreadsheet! Do you have any idea if the house will be reopened as an inn?
January 11, 2011 at 9:06 PM

Courtney Mroch said…
Oh yeah, that would be a nice house to buy! Sorry it got taken off the market. Maybe one day it will come back on when you have the mula to purchase it. ;) Although, once it's opened as an inn you can always take a romantic jaunt there to try and meet the ghost...
January 12, 2011 at 6:48 AM

Jessica Penot said…
Lewis, I'm not even sure they are going to make it into an Inn. It has been so many things the new owners could have a different vision for it. I'm going to keep my eye on it, however.

Heart Centered Psychic said…
I hope the new owners love and honor the spirits that reside within!
January 13, 2011 at 9:05 AM

Castle said…
Wow, that is a creepy story! I also have an interest in ghost stories and other paranormal tales, but I have to admit that they scare me too much. I wonder if there are other haunted houses maryland that are similar to the Snow Hill Inn. It seems like most ghost stories take place in older buildings...
March 16, 2011 at 7:31 AM

Anonymous said…
The snow hill inn is a very beautiful place, and yes, also very haunted. I worked there just out of high school, and can say this to be true. It's been almost 20 years ago but, I can still clearly remember the feeling of "not being alone". I think the basement was by far the worst for me, for some reason. Some of my co workers thought one of the bedrooms was the worst, others said the bar. I guess it all depends on who you ask. Other strange things would happen during my shifts but, not every day. For instance, I had a fan fly off of the shelf and barley miss my head once. One night, the bathroom door became locked from the inside. It had one of the old timey bolt locks, with no windows inside the bathroom, that was pretty hard to explain. We had two guests leave in the middle of the night once, because someone or something kept snatching their covers off, and then began shaking the bed. I could go on and on here but, you get it! I worked there for about two years and encountered many different things and yes, at first it was scary but, I got use to it. I loved the job, by the way!! Somewhere through the years the ghost inherited a nickname "J.J" and other than the fan, (which happened during my first week) he really didn't bother me much. We did have a dishwasher that couldn't handle it and did in fact end up quitting but, that's a whole other story!
June 25, 2011 at 1:44 AM

Anonymous said…
I am a resident of Snow Hill and I live right down the street from the Inn. The house is still for sale, it's bank owned, and is listed for $150,000. I toured the house a couple weeks ago when the listing agents were there and was told that they would accept less than the asking price so don't let it fool you. It's a beautiful home inside and out...just needs some TLC!
July 11, 2011 at 10:52 AM

Anonymous said…
I toured this home, yesterday. No strange happenings, just an erie feeling upon approach to the upstairs bedroom on the left, definitely like another presence was about. The home is listed for 150k. A local Snow Hiller said it could "probably be gotten for less than 100k." There is a commercial kitchen inside, and the house needs about 200k of repairs and upgrades.
July 17, 2011 at 6:38 PM

Anonymous said…
This awesome inn is going up for auction on Sept. 8th! I wish I wasn't spending all of my money on school or else I'd try my hand at it. The minimum bid is $25K! The bank really wants to get rid of it...someone with a big heart and some fresh culinary ideas please buy it! We need more foodies!
August 25, 2011 at 2:23 PM