The Ghosts of Antarctica 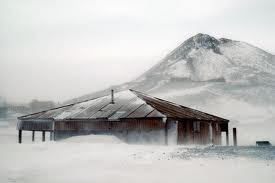 Antarctica is the coldest, driest, windiest, and highest continent in the world.   It is also the loneliest continent in the world.  The very whisper of its name brings to mind images of desolate snow covered landscapes and abandoned, snow covered towns wrapped in silence and ice.   When I was young and wild,  I dreamt of travelling to Antarctica and seeing its vast, white, emptiness.   Those were the days when I did crazy things, like climb Mt. Kilimanjaro.  I never thought of ghosts back then, but it is no surprise that Antarctica is haunted.  Any continent that has a mountain range called the ghost range must be haunted.  The ghost range are very high mountains, but are called the ghost range because they have never actually been seen by people.  They are hidden beneath 4m of ice that never melts so all that can be seen of them is ice.
There are many ghost stories lingering in the frigid cold of this continent.  Ross Island is one of the many icy islands that surrounds Antarctica and is considered a continuation of the continent.  McMurdo Station is a United States base on Ross island.  One visitor to this base, commented that as soon as she entered the base, she knew something was wrong.  She could feel the wrongness in her toes.   She isn't the only one who feels this wrongness, because Ross Island is considered by many to be thick with ghosts.  In 1979,  an Air New Zealand flight crashed into Ross Island killing 257 people.  The plane crashed into Mount Erebus.  Those who visit Ross Island have described ghostly encounters of all sorts. Visitors to the base have heard ghostly footsteps and  voices in the lonely darkness.  The ghosts of the victims wander this island.

Scott's Hut at Cape Evans is also said to be haunted and visitors there have also said to have had paranormal encounters.  During the winter of 1911, 25 men of the Terra Nova shore party lived in the hut. From here Scott and his men set out on their deadly journey to the South Pole.  One visitor commented that just stepping into the hut made him feel uneasy.  The ghosts of the ill fated explorers are still said to linger there, leaving an uncomfortable feeling behind them.  This hut is now abandoned, but the ghosts remain.  There is a cross nearby the hut.  This cross was built  in memory of the three members of Shackleton's Ross Sea Party who died not to far from the hut.  It is possible that these ghosts haunt the hut as well.  The Hut seemed to call to ill fated explorers and the images of this hut serve as a reminder of all who have died trying to conquer this brutal continent.

There are many other ghosts lingering in Antarctica.  Abandoned huts and deserted whaling stations serve as reminders of those who have lived and died in the ice.  There are so many stories I could do several posts on them and maybe I will.  As I sit drinking my hot cocoa and looking out on the winter wonder land that Alabama has become, I can't help but think of the snowy ghosts of Antarctica and dream of some day travelling to meet them. 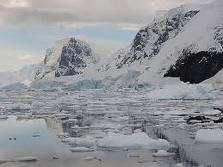 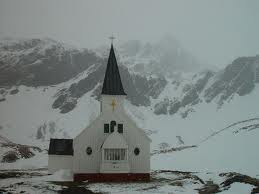 Julie Ferguson said…
I'm not surprise there are ghost in Antartica. There are "things" running around that frozen desolate place so why not ghosts. I hope you post some of the stories.
January 14, 2011 at 7:43 AM

Gina said…
Have to agree with Adsilla there...not truly surprised about ghosts being there. Now the types and the stories they carry.....THAT would be the surprise. Enjoy your southern winter wonderland! (We've got the temperature, just not the snow...)
January 14, 2011 at 8:32 AM

Heart Centered Psychic said…
Beautiful post and would love more stories and photos from Antarctica, as well!
February 1, 2011 at 9:51 AM