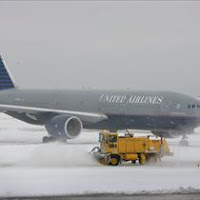 This is a horror story of a different sort. There are no ghosts, but I certainly felt haunted.    I wasn't alone in my haunting.  Yesterday, it seemed like every single person who set foot in New York Lagaurdia Airport was being chased by a demon with a violent disposition.  The demon, in this case, was a massive blizzard that was cutting through the middle of the country and grinding air travel down to an utter standstill.   In New York it was warm.  There was a gentle rain, but just to the other side of the Appalachian Mountains the country was being buried in snow.

When I walked into the airport, the line was already so long it hung outside the building.   We waited for hours just to check in.  I knew my flights had been cancelled and had already spoken with a very unhelpful woman who told me it would probably be several days before I escaped from NewYork.  I got to the front and another lady did what she could.  She put me on standby on a flight to Atlanta that if  if left on time at 3pm I could then catch a flight to Huntsville, Alabama that left at 6pm  What were the odds?  The people in front of me in line had already waited for standby seats 3 times and I was the 10th person on the standby list.   But I went and waited.   The bathrooms were filthy because thousands of people were crammed into terminal C praying to get anywhere and also, apparently, peeing on the toilet seat and floor in their anxiety.

The waiting areas spoke of the cultural differences between North and South.   There were so many people there weren't anywhere near enough seats so people were sitting and laying on the ground.   I looked around and saw women in their 60's and pregnant women sitting on the floor while young men and middle aged men mostly had the chairs.   I was switched between gates 6 times and as I struggled with my bags I was pushed aside for being to slow.  After my standby flight came in later than expected, one woman told me she could get me on the next flight to Atlanta.  She said just to take it because I might not get out of New York for a while.  She said take it even though all the flights to Huntsville from Atlanta were oversold.  She gave me a first class ticket and I figured I was at least closer to home.  May I say that first class is amazing.  They fed me a meal, gave me liquor (which I needed), warm towels, and kept my drink glass full. It is amazing how much the little things matter.  That terrible, half froze, airplane sandwich made me feel like everything was going to be fine.

I made it to Atlanta and I knew I was back home in the South.  Several gentlemen offered to help me with my bags instead of pushing me over.  In the full train, gentlemen gave up their seats for ladies and elderly.  The South may have its problems, but they also know how to to be kind and unselfish.  I was happy to be home.   I went to the last flight to Huntsville and found that it was almost empty. Everyone who was meant t be on the flight was trapped somewhere and virtually no one had made it to their connecting flight.  I made it home and I've never been happier to be back in the South, even though it is colder here than it was in New York.
Email Post
Labels: airport disasters Laguardia Airport O'Hare Airport

Sharon Day said…
When are we going to get high speed trains? I despise flying and this is just another example of the hassle. Sometimes it seems shorter to drive places when you add in airport time on both ends. Glad you could get out of there okay. Next time, plan the trip in the summertime.
December 13, 2010 at 1:07 PM

Julie Ferguson said…
Glad you made it home. It sounds like it was touch and go. While you were not enjoying the cold weather, we had a record high of 82 degrees, yuck!
December 14, 2010 at 6:02 AM