The Ghosts of The Algonquin Roundtable Writers 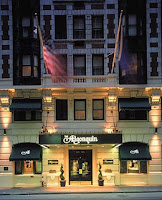 Next week I will embark on a journey that is completely ill advised.  I am going to New York to attend one of the Algonquin Writer's Conferences.  This trip is ill advised because I don't have the money to waste on a trip to New York,  I am leaving my children during a time when they need me, and the probability of me actually accomplishing anything with this conference is slim.  During this conference,  I will have an opportunity to pitch my latest fiction novel to 4 editors from big houses like Penguin.  I will be nervous and sweaty and will probably stutter and drool, making the likelihood of them having interest in my book even lower.   Why am I going you may ask?  I am going because I am a dreamer and I just can't help myself.  I really want to be a fiction writer.

As I have prepared for me trip, I found a link between my trip and the ghosts of many old writers. This link, however tangential, has just made my day.  The Algonquin group  is running the conference  I am going to and one of the most haunted locations in New York is the Algonquin Hotel, which is said to be haunted by the ghosts of the Algonquin Writers Round table.   The Algonquin Hotel  was made famous as being the meeting place for the Algonquin writer's circle who were considered to be some of the best writers of the time.  The Hotel is said to be haunted by these authors to this day.   The group, who called themselves "The Vicious Circle" included Dorothy Parker, Franklin Pierce, Robert Benchley, Robert Sherwood, Alexander Woolcott, Harpo Marx, Harold Ross, Heywood Broun, George S. Kaufman, Marc Connelly, Franklin Pierce Adams, and Edna Ferber.   Guests at the Alonquin have claimed to have seen various members of this group of writers throughout the hotel.   They have also claimed to hear odd noises and witnessed other supernatural occurrences withing the hotel.

I'm not sure what the link between the group that is hosting the conference I am going to and the old Algonquin writing circle is, but I feel inspired to know that there is some kind of link between the conference and the ghosts of more successful writers.  The Algonquin Hotel will be the first haunted location I visit in New York.  Maybe I can find inspiration in the ghosts of greater writers than me.
Email Post

AndAlex said…
Have confidence! Project it! Know that whatever happens it reflects no true value judgment on your work and your passion. If it goes poorly, take it as a pivot point for improvement. If it goes well, well there ya go!