The Poltergeist of Calvados Castle 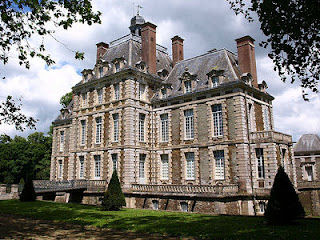 Calvados Castle is located in Normandy in the north of France.  The castle is relatively new as far as castles go.  Especially as far as French castles go.  In France, if a castle is less than three hundred years old it seems new compared to the medieval ruins that pepper the landscape.   Calvados Castle was build in 1835.  It was built on top of some ruins that have never been described.  Perhaps this was the source of the problem because between 1875- 1876 the castle endured one of the longest sustained poltergeist occurrences ever recorded.

The family involved in this poltergeist activity requested to be left out of the stories and so I have been able to find their names and they are often referred to X.  They inherited the castle in 1865.  The haunting started without subtlety.  On the first night, objects flew around the rooms,  there were bangings on the doors and a monstrous boom filled the quite halls of the castle.  The banging on the walls continued nightly for three months.   One of the worst events occurred during a terrible rainstorm.   The entire family was awoken by a screaming woman.  The servants helped Monsieur X find the woman who seemed to be in peril, but no one was found.  The screams seemed to be coming from a room that is known as the green room and is said to be the most haunted room in the castle.  Every night the screams became worse and worse.  In fact, the poltergeist activity in general seemed to get worse as time progressed.  It heaped books in the study.  Madam X reported hearing noises like a bull bellowing while her husband was away.   It was particularly active in the children's room where beds were turned over  and toys were thrown across the room. At the peak of the haunting, as it was recorded, the ghost played the locked organ, knocked over furniture and sent water down the chimney, scattering the lit coals in the face of the children's tutor.

Finally,  in January the family couldn't take it any longer.   They called upon the parish priest to perform an exorcism.  It was a long night and those that witnessed the exorcism described a male voice taunting the castle's occupants during the exorcism.  The exorcism peaked around 11:45 pm.  Those who were there  describe screaming and banging and when the last rites of the ritual were performed they say that a demon cried out in what sounded like agony.   The haunting was over and there have been no reports of incidents since that time.
Email Post
Labels: Calvados Castle French Ghost Stories French Hauntings

Courtney Mroch said…
I want to know the same thing as Pam, because I want to know if you took that fabulous pic. If so, that is another example of the type of pics I'm now striving to capture due in part to your inspiration! (btw, another GREAT post!)
November 10, 2010 at 4:25 PM

Pale said…
Interesting. If it truly was poltergeist activity, then an exorcism wouldn't have helped? Yes? Because a poltergeist haunting is supposed to be caused by (living) human angst, not by demons? The stacking and the flinging does sound like poltergeist activity ... curious. What a beautiful-looking place. !!
November 10, 2010 at 4:46 PM

Jessica Penot said…
Palemother.... They call this case a poltergeist case, but the details are inconsistent. It may have been linked to a person, but they try to keep family details out of the story. It seems like it may have been attached to one of the children,,, but you are right it is consistent with a poltergiest case.

Courtney and Pam.... I've never been here. We plan on going to Normandy during our next visit so hopefully we can catch on our next trip!
November 11, 2010 at 6:11 PM

Anonymous said…
This castle is called "le château les tourneurs".You can find his photo and the real names of the owners, of the servants, the religious...by googeling "le château les tourneurs);the castle burnt in part but the most haunted room (the green room)escape to fire.The actual mayor,is in possession of the book of Celina Desbissons who described all the facts of haunting.This woman is his "arrière, arrière grand mother".
May 3, 2016 at 9:39 AM