The Lost Lovers of the Eiffel Tower 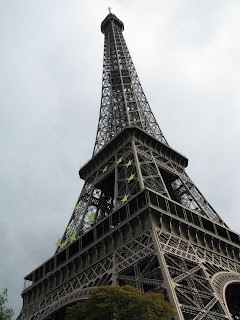 It is appropriate that I end my week of French hauntings with the most famous location in France.   Whenever you think of France,  this is the first structure that comes to mind.   The Eiffel Tower has become a symbol of France.   It can be seen in every souvenir shop in Paris in miniature.   If you know nothing else about France, you know the Eiffel Tower.  The Eiffel tower is one of the most recognizable structures in the world .  It was built for built for the 1889 world fair and was a marvel of modern engineering.  It awed visitors of the fair and became the golden mean to be met by all world's fairs to come.  At the time of its completion,  the tower was the tallest man made structure in the world.
It is not surprising that legend speaks of the Eiffel Tower being haunted.  Legends cling to historically ssignificant locations like moss on a rock.   The legend of the ghost of the Eiffel Tower is a sad one.   According to legend,  a young couple once met atop this romantic tower.  They met at the Eiffel Tower set on singular purposes. But, sadly, their purposes were divided.  The young woman was determined to end her relationship with her lover and thought that the beauty of the view from the tower might soften the blow.  The young man was taking his belle to the tower to propose marriage.  So the two ill fated lovers met atop the tower and declared their purposes.   The young man didn't take it well and became enraged.  Perhaps his temper was part of the reason the young woman didn't want to marry him.  He became so enraged that he gave his belle an ultimatum.  He told her that if she didn't marry him, he would kill her.  The young woman was set.  She would never marry him.  He gave her one last chance and offered to spare her life if she would consent to marry him.  The woman stood firm.

The young man pushed his belle from the top of the tower, ending her life.  It is said that the young woman still haunts the Eiffel Tower.   Her laughter can be heard atop of the breath taking structure and sometimes it is accompanied by her scream. 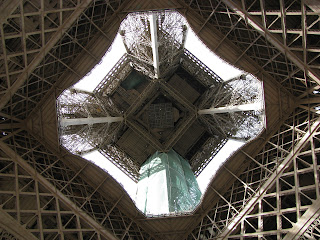 Julie Ferguson said…
Very sad story .... the moral of this story is not to break up with your boyfriend at the top of the Eiffel Towel especially if he has a bad temper. It won't end well. I hope to be able to see the Eiffel Tower in person some day.
November 16, 2010 at 7:32 AM

Adsila... Yes, it isn't wise to break up with your abusive boyfriend on the Eiffel Tower, Empire State Building or from any other height.
November 16, 2010 at 2:16 PM

Anonymous said…
That's really sad. But if I were her, and my lover told me to either marry him or he'd kill me, I'd act like I was going to marry him and then report him to the police once we were off the tower.
August 4, 2014 at 10:27 AM