A Ghost Story for my Son 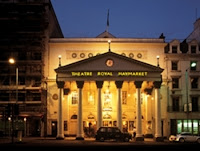 The greatest miracle in my life will always be my children.  They never cease to amaze me as they grow into their own little people with their own thoughts and ideas.  It is always amazing to me how much I impact my boys.  How much my interests and passions shape theirs.   Sometimes I forget that I am a role model.  My son reminds me how important I am every time he goes to the library.   He brings home a different collection of ghost stories every time he goes.  Today he announced that his favorite ghost story  is from a book called Great Ghosts by Daniel Cohen.  It is the story of The Gray Man.

The Gray Man is a ghost that haunts the Theatre Royal in London.  The Theatre Royal is one of the oldest theatres in London and is filled with plenty of history.   The Gray Man haunts this old theater dressed in clothes that appear to be around 250 years old.  He is not like other ghosts.  He doesn't haunt the theater in the dark terrifying people from the shadows.  Instead he is usually seen in the afternoon during the times when the actors are rehearsing.   The actors know the gray man well.  In fact,  he is a welcomed figure in the theater.  Apparently,  he always appears to the actors if the show they are in is going to be a hit.   He is so infamous, that if he doesn't appear, the actors become anxious.   They know that their show is going to flop if they don't see him.  The Gray Man has also been known to help actors.  One actress was paralyzed by stage fright,  but when The Gray Man put his hand on her back, the stage fright vanished.

There are many theories as to who The Gray Man is, but my favorite is the most mysterious story.  In 1860 when they were doing renovations to the theater they found a skeleton bricked up in one of the walls of the theater.   The skeleton had a knife in its ribs.  No one knows who the bones belonged to but many believe that whoever he was, he still wanders the theater.
Email Post
Labels: Ghost Stories for Children Royal Theatre Ghost The Gray Man

Anonymous said…
That's cool!! My boys have no interest in ghosts. Nor my husband, I'm alone on this one. But he does humor me sometimes and goes to haunted places with me.
November 5, 2010 at 2:07 PM

Jessica Penot said…
That's a shame! There is nothing like a camp fire ghost story with boys!
November 5, 2010 at 3:38 PM

Pam Morris said…
another good tale...and your son found this one? I think you'll have some competition someday with ghost story blogging...:)
November 8, 2010 at 4:09 AM

Pale said…
Another great story. When I was community leader on a paranormal message board, my co-cl (the medium I've mentioned before) once asked people to name places that are known for high activity. Theaters were one of the places mentioned. They say that ghosts feed off of energy and so places with high energy and lots of emotion tend to be more active. ?? Other places mentioned included airports/airplanes and hospitals.
November 9, 2010 at 7:46 PM