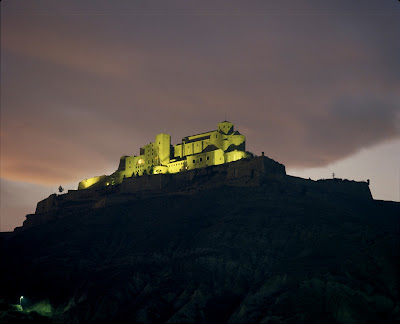 Looming proudly atop a selection of Spain’s hills and mountains are some of the country’s finest hotels:  The spooky Paradores hotels. These were founded in 1928 by King Alfonso VIII, in his bid to make Spain more attractive to tourists, and are magnificent conversions of some of Spain's oldest and most majestic historic buildings into luxury hotels. Yet taking a vacation at one of these hotels isn’t always just a tale of majesty and repose. Deep within the Paradores’ weather-beaten walls are stories of the tragic deaths of pilgrims, monks, Dukes and Kings who have inhabited them.

The Alhambra is perhaps the most magnificent of the Spanish historic buildings. Once a Moorish palace, it is here that the famous writer Washington Irving was once a bohemian squatter, recording the history of these sweeping buildings and gardens perched high on the hilltop overlooking once-Islamic Granada in the southern Spanish region of Andalusia. It is here that the Moorish sultan discovered an affair between his favourite concubine and one of his courtiers. The lovers were parted and the courtier (along with his entire family) were executed. Some guests of the Parador have sworn they hear the ghost of the love-struck courtier still roaming the palace and grounds on still, moonlit nights.

Forbidden love is a powerful theme in the ghost stories of the Paradores. Perhaps the most well known is daughter of an 11th century Viscount. Although promised to a nobleman, she fell in love with a lowly governor (who was also a Moor – a double sin!). Her father locked her in one of the castle's tower (in the now Parador de Cardona), promising to release her when she consented to an 'acceptable' marriage. A woman of her convictions, she refused, and lived a long and lonely life locked away from her lover and the world. Her ghost is said to still inhabit the tower, some 900 years after she died there, and her desperately sad presence is often felt in room 712.

Photographs of mysterious spirits have been captured at the Parador de Jaen, a thirteenth century Arab fortress that was refurbished and opened to tourists in the late 1960s. Although no-one can figure out who these hapless souls are, or why their spirits still roam the halls, the haunted house in Belmez consistently records the impressions of women's faces on the walls and floors. Even when chipped away (as Maria Gomez found out more than 30 years ago), the faces return, with company. 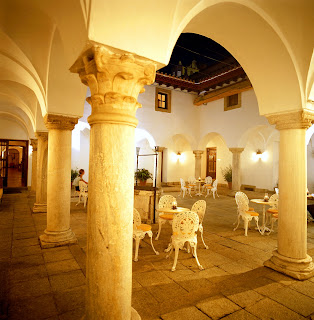 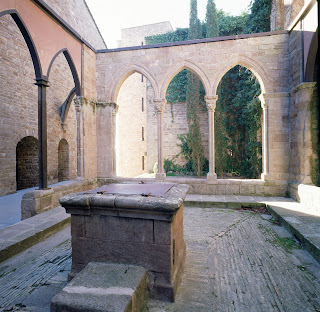 Lewis Powell IV said…
Thank you for this lovely post! It's rare to hear stories from Europe outside of the British isles. I know there have to be tons of stories, but finding something in English is difficult.
October 16, 2010 at 1:29 PM

Jessica Penot said…
Lewis... I'm glad you liked it. Early on I did a lot of French posts after I had just returned from France. I'll have to do some more! Europe is filled with ghosts.
October 16, 2010 at 2:28 PM

Anonymous said…
Excellent news for you now, We"ve got amazing shoe clearance sales on traditional cardy ugg boots on sale, particularly uggs clearance sale shoes, shop the shoe clearance sales prior to they more than! A single of ugg hot selling styles, the UGG boots classic cardy tiny sale a calf height boot functions genuine twin-face sheepskin and our signature woven mark. All boots in our Classic Collection feature [url=http://www.dalinsell.co.uk/]ugg Boots sale[/url]
a soft foam insole covered with genuine sheepskin and have a molded EVA light and flexible outsole designed for extraordinary comfort with every single step. The ugg sale is a essential item in any lady wardrobe
Autumn and winter UGG the Italian handmade Series Highlights: UGG handmade Italian series all the components choice in Italy. Manual soaking and hand-painted leather to create a hierarchy of uniform color and comprehensive. Buffalo leather, waxed wool, stacked leather with all used to rock and roll spirit ultimate rendering given the UGG Italy handmade series,
This is because although ugg boots and also footwear www.dalinsell.co.uk
can be high-priced additionally they may possibly do not be purchased at reasonably priced costs, there are still men and women hard to discover experiences even though. All you have to do in that case is to attempt to keep your eyes peeled for these periods to enable you to acquire the most effective come to terms of all time when taking into consideration uncovering an person particularly relaxing ugg boots sale. On the other hand, when you hunting for some of these ugg sheepskin boots available for obtain that are integrated with terrific marked-down value, it may be best to preserve yourself updated to start off with on which you want to steer clear [url=http://www.mpboots.co.uk/]cheap ugg Boots[/url]
of when it comes to true uggs boot.
One particular thing is the truth a single of the most common incentives for generating use of your cards is a cash-back or even rebate provision. Usually, you going to get 1-five% back upon numerous acquisitions. Dependent on the cards, you could get 1% returning on most expenditures, and five% once again on buying created going to convenience retailers, gasoline stations, grocery shops in addition to merchants.
Properly are interested in these out of distinct recruits or simply dealers guarantee that they could be reliable as the name indicated and mark authencity obviously. Accessibility to various shops or to point out suppliers sold in the industry include virtually these merchandise as well as to claim pretend these items that howsoever glimpse precise in most aspects but are accurately not truly. Consequently, it gets crucial to corner study these folks after which it utilize them for your desired destination.

Anonymous said…
I have been exploring for a bit for any high-quality articles or
weblog posts in this sort of area . Exploring in Yahoo I at last stumbled upon this site.
Studying this info So i'm happy to convey that I've an incredibly
excellent uncanny feeling I came upon just what I needed.

I most surely will make sure to do not disregard this site and provides it a glance
on a continuing basis.
Here is my page : free iphone 5
November 27, 2012 at 1:22 AM