The Ghost and His Mullet

The Flora-bama sits on the boundary between Alabama and Florida near some of the most beautiful beaches in the world.   It is a unique cultural experience.  Stepping into the Flora-bama is stepping into the deep Southern culture that lives along the gulf submerged in bayous and sand.    It lingers in a place where rural Southern culture and massive tourism merge together.   It is a constant party that only stops for the occasional Hurricane.  It is also haunted.

The story of the ghost of the Flora-bama is a sad story.   Orville Stickenbacker was a shy boy that lived his entire life in Orange Beach and the surrounding area.  He had lost both his parents and didn't have very many friends.  Orville worked at a shop in Gulf Shores selling nick nacks to tourists.  He took his role in Gulf Coast culture seriously and tried to dress the part.  He wore brightly colored tropical shirts and had a pet hermit crab named Jezebel.

The next year was not kind to Orville.   Orville began to get sick.   He found a lump when he was taking a shower and began losing weight.   People noticed Orville's steady decline.  They begged him to go to the doctor, but for some reason, Orville refuse.   He grew sicker and sicker and Orville did nothing.  He wasted away without medical attention.  No one can say why he didn't go to the doctor.  Maybe he wanted to die, maybe he couldn't pay the hospital bills, but forever reason he just wouldn't get help.

The next year Orville went to the mullet toss with his pet hermit crab, Jezebel in his pocket.   He participated in the mullet toss but did not win, so he asked if he could toss a fish.   He tossed the fish and with that action began the now famous fish toss at the Flora-bama.  When the night ended and all the fish and mullets had been throw, Orville walked out onto the beach.   He walked into the ocean and drown himself.

People say that Orville still haunts the Flora-bama.  He sits on the back deck watching people throw mullets and fish.   He is often seen wandering the beach and walking towards the waves. 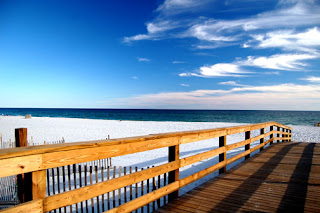 Lewis Powell IV said…
Fun story! But what exactly is the mullet they are tossing? I know it can be a hairstyle or a fish, are they tossing a wig?
October 3, 2010 at 1:00 PM

Jessica Penot said…
They are actually tossing a wig in mullet style. They have a special day for throwing fish too.
October 3, 2010 at 4:21 PM

Anonymous said…
whaaaaaaat? i'm from orange beach, the mullet toss has ALWAYS been the fish mullet (while i realize its odd to throw a fish across the state line, throwing a wig is both ludicrous and difficult). i mean i love ghost stories, i just wish they were plausible.
June 2, 2012 at 8:50 PM