The Building That Brought Poltergeist III and Ghostbusters to Life 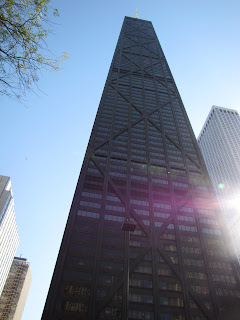 While we were in Chicago I stayed in an old hotel right across from the John Hancock Building.   The Hancock building is an ominous structure that immediately gives you the creeps.   I knew it was evil the first moment I saw this building.  First,  I hated the ugly, black monolith.  And secondly,  the sign of hell's winter, The North Face store was on the first floor.

" LaVey wrote many essays during his time as the Satanic Church’s leader, including fascinating analyses of the problems of modern architecture. LaVey knew--as most occultists do--that the trapezoidal shape holds significant power for arcane forces: traditionally, the shape is believed to serve as a doorway or “portal” for occult--or even diabolical--forces. As a young man, LaVey was fascinated with the thought of H.P. Lovecraft, whose horror novels often feature characters grappling with the dangers of “strange angles,” and it was Lovecraft’s work which led LaVey to first pursue his study of modern architecture’s sometimes deadly capabilities."


It is hard for me to take anyone to seriously who bases their religion on a fiction writer, but regardless of LeVey's credibility the building has seen many strange murders, deaths and suicides in its day.  It was also the inspiration for the movie Ghost Busters.  They based their building built to summon evil on the Hancock building.  The Hancock Building was also the place where the most horrible film, Poltergeist III was shot.  If that movie isn't proof of a curse, I don't know what is.  The movie Poltergeist is often said to be cursed.  Many of the main actors met their untimely demise shortly after the filming of Poltergeist III, including the girl who played Carol Anne.  Those that believe the Hancock building is a funnel of evil believe it was this building that cursed the cast of the movie.

If you would like to learn more about the many deaths and ghosts that walk the halls of this diabolical building you can go to the site http://www.chicagohauntings.com/hancock.html  .   To learn more about the Poltergeist curse you can go to  http://www.snopes.com/movies/films/poltergeist.asp .  I'm not sure any building can be built for evil, but the Hancock building is certainly haunted,  to many strange deaths and occurrences have happened here to account for it any other way.
Email Post

Anonymous said…
How is permit and tolerate in public a Satan evil church? that why Chicago are real cursed and NOT a joke. If Catholic Church are under attack from all evils dems liberals, not any another church can permit operate.That church are NOT religion church. AQ jUSTICE TIME COME, AND not ESCAPE for any liberals.
August 9, 2013 at 3:21 PM