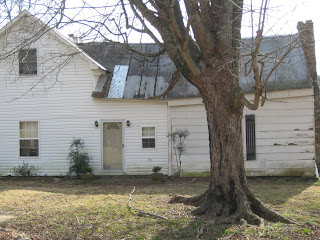 Last Christmas, when I started blogging about ghost stories,   I had been inspired by the extraordinary wealth of folklore and ghost stories that the nurses where I work and where my husband work seem to possess.   In rural Alabama,  these stories are as thick as the humidity.    I would sit and listen to the nurses and other country staff tell their stories and I thought that someone had to write these stories down.   My husband brought back stories for me from the hospital he works in, which is much more rural than the one I work in.  Yesterday,  another nurse brought me another story.  Of course,  I'm pleased as punch.   She even had pictures with her!

This nurse is young and lives in a farmhouse way out in the country.  Her farmhouse is over one hundred years old and those that have lived there have kept up with it by rebuilding it and fixing it up with modern amenities as time has past. Originally the house was a log cabin and beneath the brick and modern additions,  the old logs still stand strong.  The old farmhouse has a layered effect that tells the story of the many generations that have lived there.  Within these layers,  are ghost stories.

The nurse says that she isn't convinced her house is haunted.   She's seen things that aren't right, but it takes more than that to convince her.  Even if it is haunted, she feels that whatever is in the house is harmless.   She isn't afraid.  Her husband, on the other hand, is unnerved by the presence.   He feels as if something is always watching him.   He feels like he is never alone and  he has suggested they leave because of this.

The story that is told with the house is brilliant.   Over a century ago,   when the country was still new,   a Native American broke into the farmhouse looking for food and money.   The owner at the time was prepared for this type of event and cut the intruders head off with an axe.    The intruder's head rolled down the stairs.    According to the legend,   you can still hear the head rolling down the stairs and it is this Native American's ghost that still haunts this farmhouse.   The nurse's father says this is all made up nonsense, but even if it is, there is something in the house and that something is always watching. 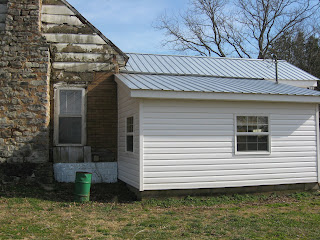 Julie Ferguson said…
You are lucky to hear these wonderful ghost stories. Those old farmhouses seem to have great history which sometimes leads to spooky hauntings.
August 4, 2010 at 10:26 AM

magikalseasons said…
Fasinating tale! The history and folklore of these types of hauntings are wonderful. I envision you writing a screen play for this one.
August 4, 2010 at 1:57 PM

Jennifer Oberth said…
Interesting. I'd be curious to see if anything more happens to them, or the husband.
August 4, 2010 at 5:29 PM

Pale said…
Interesting story!! Loved the reports from your ghost hunting adventure, too.

I was taught that instincts are a good indicator of whether an entity is negative. If you feel the presence is benign it probably is (although sometimes negative entities will mascarade as being freindly at first ... they eventually betray themselves). If you feel creeped out, you need to trust that feeling. A benign spirit or a loved one who is just visiting will not want to frighten you. And therefore usually won't come upon you in the middle of the night or other situations where you feel especially vulnerable and frighten you.

Has the husband tried politely asking/telling whoever it is to back off? Maybe he could google some links about psychic protection. People don't realize they have more control than they think they do. Sometimes spirits will provoke feelings of discomfort in order to feed off of the energy that creates. But in general, the living have more to fear from the living than from the dead. Standing up to whatever is creeping you out can sometimes improve things.

I was also taught that earthbound energy isn't good for the living. In cases where a loved one can't bear to leave a beloved spouse or children ... it's actually not good for anyone for them to stick around. If they cross over, they can still visit, but they bring a much more positive energy. Earthbound is an unnatural state. Some ghost hunters/mediums leave well enough alone, others believe it's best to cross them over. Although if they are earthbound, then it might take some convincing over time since there is always a reason they didn't leave.

MaryAnn Winkowski (the real life ghost whisperer) specializes in earthbound spirits (the only kind she works with) and she writes about this negative effect. She can also sense whether an earthbound spirit is present in a home just by speaking with the homeowner on the phone. She is in Ohio. There is contact info on her website. There is a wait (probably long), but I think she will call you and talk to you if you write to her about your haunting.

Pangs said…
I love old farmhouses. Such character. It's no wonder they engender a wealth of stories and folklore. They make for striking photographs as well.
August 5, 2010 at 3:25 PM

Missy said…
I've been in a couple of old farm houses, as well as a 'shack' house where my ex-husband and his (many) brothers and sisters lived (he was 16 years my senior).

In the 'shack', his mother was killed by his father in a drunk rage on SUSPICION of cheating. He killed her with a 12-gauge, double barrel, sawed off shotgun.

Once while in there, we heard some of the hay that covered the floor "crinkle" and a weight that was on the floor, next to an abandoned weight lifting piece, started to move of it's own volition.

Jessica Penot said…
proudmomof3 that is an amaxingly creepy story. I don't think I would ever go into the blood stained shack either. I'm OK with ordinary ghosts but I leave when the ghosts are hostile or died a violent death.
August 6, 2010 at 9:07 AM