The Sad Beauty of Lough Feeagh

I love stories that mix folklore and ghosts.   This story is from Ireland and it blends classic Irish folklore with a ghost story, making it delicious.  It is the story of  a beautiful young woman who lived near Mallarny Strand who was a wild flirt.  Not only was she a wild flirt and a heavy drinker, but she had a wicked reputation for using her beauty and sexuality to con men out of her money.  Her name was Reenie and she was high spirited and utterly seductive.

Young Reenie was living high on her whiles for a long time until she met a man named Rony.  Rony was not a very attractive man and in fact he was quite funny looking.  He looked as much like a horse as a man.   Reenie became quite enamored of Rony and he used her body and her money quite liberally.  That was until one day a gypsy woman saw the couple in the street and cried out, "Holy Saint Anna-fer God, Reenie, where did ye pick up like ave him?  He's a pooka."

A pooka is a creature who is fairy kind.  They are a fearful kind of creature that can change and bend shapes at will.  They are mischievous and delight in the mayhem they cause.  The most famous pook was Puck from a Midsummer's Night Dream.

After that,  Reenie and Rony separated.  It wasn't long after this that Reenie found herself with child.  Reenie seemed to believe that Rony was a pooka who had enchanted her and she became desolate and terrified.  She didn't want to bare a pooka child.   So Reenie went to the shore of Lough Feeagh at dawn and walked out into the icy water.  She walked and walked until she was submerged.  With the light of dawn,  Reenie's beautiful body could be entangled in the reeds of the still water.

Whether or not Reenie was really pregnant with a pooka aside, there are those that believe her ghost still wanders the shores of Lough Feeagh. Since that time it is said that the ghost of Reenie McCosky returns every year at the anniversary of her death.   She walks back into the icy water and drowns herself.  Others say that her ghost can be found there at other times and that she sometimes slaps those that wander to close to her on the cheek. 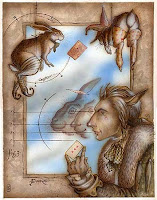 Jeremy [Retro] said…
Greetings HBA Member,
With the recent attention to the Horror Blogger Alliance and updates, I thought would be good to build a database for [over 350] the group.

Please Update Soon... and if you have updated your information, please disregard.

I love Irish folklore; as well as Scottish lore. They tell stories in such a way, you're completely drawn in; whether or not you believe. :)