Restless Nights in the Victorian Mansion 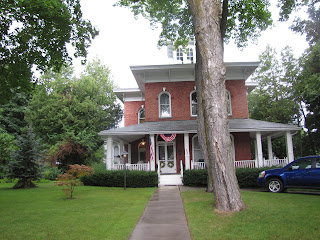 I am home now.  I am sitting in a quiet room in the Newton-Allaire house.  The house is a beautiful as ever.  It has been sitting empty for fours years now and the ghosts here are quiet.   The last time I was here my grandmother still lived here and the ghosts were loud and and robust, but years of silence seems to have lulled them into a deep sleep.   I don't feel them here like I used to.  They are a whisper hidden in quiet corners.   The ghosts were always most active here at night, making sleep challenging.  That seems to continue and the house still groans, reminding me of nights when I sat up searching for the source of strange footsteps and phantom whispers.

As I've explored the old house,  I've found bits of my history and ancestry.   The stories of the ghosts that have always lived here with us have come to light.  The house was built in 1871 by Archibald P. Newton who in 1876 was elected first president of the village of Cheboygan.  He built the stately house, with its cupalo top as a wedding gift to his bride Cornelia Allaire, who was his second wife.  We call Cornelia Allaire Aunt Newton.   Mr. Newton came to Cheboygan from St. Helena Island where he and a brother Carl in 1853 bought the island and where they built a good dock and large store.  In Cheboygan, he entered into business of processing hemlock for the sap which was an essential in tanning leather.  Mr. Newton loved to stand in his glassed in cupola atop his mansion and look out at the boats in the straights.  So do I.

Aunt Newton survived her husband after his death.  She died in 1916 leaving her entire estate to her only brother, Joseph Allaire who lived on a nearby farm.   Joseph Allaire was my grandmother's grandfather.  The house passed on to their children Charles and Bert Allaire in 1934 when Joseph Allaire died.  Subsequently the house was inherited by Bert Allaire's widow Irene Allaire.  She was my great-grandmother who we all called Nonnie.   The house is now in the hands of my mother and her 2 cousins and sister.

I hope it will stay with us and it well re-awake into the living, breathing house I remember it to be when I was child.  Now it sleeps, but everything that sleeps can be awakened. 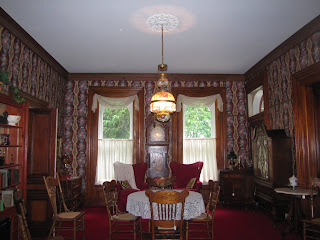 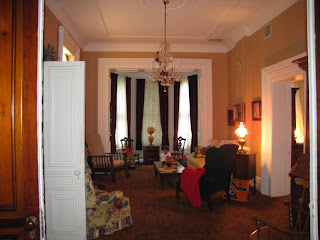 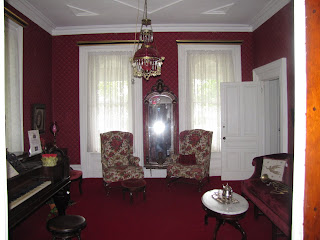 Dave the Dead said…
what a beautiful house. I read your paragraphs holding my breath, waiting for the horror that never came. I am anxious to hear the next chapters of this tale. I hope they turn out as you want them to.
August 9, 2010 at 6:16 PM

Julie Ferguson said…
I hope you can keep this amazing house in your family. I had to enlarge the first picture inside the house. It almost looked like a ghost between the chairs.
August 9, 2010 at 8:38 PM

Pam Morris said…
this is such a beautiful home and it cries out to be rescued by someone in the family...they say houses are not 'real' and alive but I will always believe that some of them are--and this one is.
August 10, 2010 at 4:08 AM

Jessica Penot said…
Dave of the Dead... the horror hasn't come yet, but I think the house is becoming more active the longer we stay here.

Above the Norm... I'll enlarge that picture. Thanks!

Pam.. My grandmother always talked about the house like a person. She would say,"the house misses you." The house has always seemed real to us."
August 10, 2010 at 8:50 AM

Elk999us said…
Thank you so very much,Ms.Penot,for posting such beautiful photographs of that lovely and charming home..
August 10, 2010 at 9:54 AM

Anonymous said…
Ms. Penot, would you ever consider giving a tour of your home to some interested teenagers? Im a local and your story is very intriguing to me. The paranormal has always been an interest of mine.
August 11, 2010 at 5:18 PM

Heart Centered Psychic said…
The house is beautiful and I'm certain the spirits that reside with it's walls were happy to see you return. I'm hoping you will find a way to keep it. Your painting is lovely, as well!
August 13, 2010 at 1:45 PM

JessAllaire said…
I came across this post today and I am a little confused! I never knew about this house. My Grandmother is Irene Allaire but she lived in the farm house that you referred to as where Joseph Allaire lived. My father is Joseph Allaire which was named after his grandfather. My name is Jessica Allaire of Joseph Allaire and Catherine Fish both of Cheboygan. Can you please tell help me to understand and learn more. I am not sure who Pam is and how Irene is your great grandma when I thought I knew all of my cousins names at least.
please email me
jessica.allaire@yahoo.com
December 13, 2010 at 10:35 PM

Unknown said…
I am Jeremy Gray son of Sandy Allaire who is daughter of Glenn Allaire, I love this, our family history is very rich and full of this stuff please keep me posted i cant wait to show this to my mom
December 13, 2010 at 11:21 PM

Unknown said…
I stayed there in 2005. My mother is CarolLina Bowman. I felt someone sit on my bed in the middle of the night but for me it was comforting because i believed it was my grandmother who i never got to meet. What a beautiful home and i will cherish that vacation forever.
July 24, 2018 at 4:28 PM

Jessica Penot said…
Jess Allaire....Sorry I am so slow. I someonehow missed your comment as I haven't kept up with the blog as well as I should. Please email me and I can let you talk to my mother who is the daughter of Kathleen Allaire. I know her mother had a farmhouse. My mother has all the photographs and the family tree and she could help you understand all the lineage better.

Jeremy... I am so sorry I missed these comments. I love hearing from all the Allaires!

Unknown. I cherish every trip I had there. I still watch the market and hope some day I can buy it back. Hopefully, I will be able to afford it someday. It is so sad that it had to be sold. Thank you for your comment.