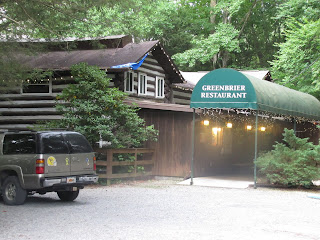 I spent last week in the mountains outside of Gatlinburg, Tn.   While I was travelling,  I had very few ways to keep in touch with the outside world.  The one thing that seemed to work for me was the twitter application on my iphone.   Thanks to this application and Chris Love, otherwise known as smokies_r_great on twitter,  I was able to find a wonderful haunted restaurant just off the main drag in Gatlinburg.  The Greenbriar Restaurant is on the top of a hill. The road to the restaurant creeps and curves through dark woods.   I almost thought I was lost and gave up.  GPS was no help in guiding me through the forest.  The restaurant was obscured by the mountain.  It was hidden from view  behind trees and nature.  I never would have found this secluded gem without help.

The restaurant itself is in what looks like an old cabin and has an atmosphere that lends itself to ghost stories.  A mist hangs about the front door and clings to the old brown building.  The cabin was originally built in 1939 and then converted to a restaurant.  The restaurant doesn't hide from its ghostly history.  It wears it proudly.    In fact, one of its most popular deserts is Lydia's Chocolate Suicide for Two.   The staff all say the restaurant is haunted.  The haunting is as much a part of this extravagant dining experience as the logs that make up the building.

The story of Lydia, the ghost that haunts The Greenbriar, is a sad one.   According to legend,   Lydia was left at the altar on her wedding day by her one true love.  At the time,  Lydia was a resident of the cabin and ran home weeping.   She hung herself from the rafters of the old cabin.   A few days later the body of Lydia's true love was found mangled in the forest.  He hadn't left her at the altar.  He had been killed by a cougar.   The story grew and spread and the staff insists that Lydia's lonely ghost is still a frequent visitor.   Of course,  with deserts like Lydia's Chocolate Suicide for Two,  I may be a frequent visitor as well. 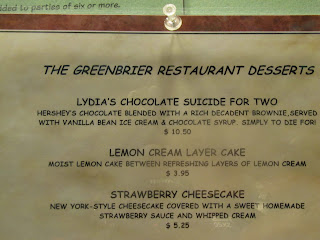 Julie Ferguson said…
Yeah, leave it up to the tweeters out there to help find those obscure haunted places. Kudos to them. How was that Chocolate Suicide anyway?
July 18, 2010 at 8:15 AM

magikalseasons said…
Oh thanks for sharing this sad tale. Something to be said about leaving a loved one at the altar! Chocolate yum!
July 18, 2010 at 8:47 AM

Unknown said…
Ghosts AND chocolate? OMG. I didn't know such a place existed! It's like Charlie and the chocolate factory for para freaks! LOL
July 19, 2010 at 7:49 AM