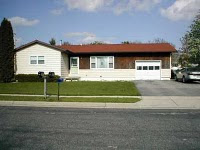 This haunting story has always been one of my favorites because it does not have a history. The haunting on Larrabbee Street has often been compared to the Amityville case, however, the house on Larrabee Street didn't have the history the Amityville house had. It is a haunting that is unexplainable. The spirit that haunted Allen and Deborah Tallman came from nowhere.
The Tallman's moved into the house on Larrabee Street in Horicon, Wisconsin in 1986. At that time, they had a little girl and a boy who was about 6 years old. Deborah Tallman was pregnant. The Tallman's loved their new home and began a fairly typical America life in their new home. Although they loved their new home, The Tallmans immediately began having difficulties in the house. They were plagued by a rash of sicknesses and their cat went crazy, climbing the walls and screaming all night. Deborah was close to her family and her family usually spent a considerable amount of time visiting Deborah. These visits began to decrease in frequency following the Tallman's move into their new home. Both Deborah's mother and sister indicated they felt sick in the Tallman home. They felt sick and suffocated.
It took more than a year for the haunting to escalate and culminate in the events that lead to the Tallman's fleeing their comfortable home. Deborah had her baby girl and the children began to complain more and more about things in their room. The little boy said that a hideous, diminutive, old woman would come into his room at night. The little girl was plagued by visions of monsters. The Tallman's grew more and more tired as their children kept them up night after night. Even their attempts at time away from home were thwarted when the babysitter saw furniture moving on it's own.
The children's nightmares could be brushed off as childhood fancy, but when Allen began to hear things and see things the Tallmans called their preacher. The preacher came into the home and told the Tallmans that their home was in the grips of something from the devil. He told them that the only way to dispel the evil that had been growing in their home was to go to church more. The Tallman's listened to the preacher to no avail. Things got worse. Windows in the basement relocated on their own, the refrigerator door remained open on it's own, the children continued to be visited by nocturnal terrors. Allen saw the garage catch on fire and when he rushed to extinguish the flame he saw a green eyed demon above the door. Allen even saw a full bodied ghost that rose from the floor in a a kind of fog and took form just long enough to tell him that he was "going to die."
Desperate, the family called the preacher again. The preacher came and told them to play church music all the time. The family listened. They listened and their was a brief reprieve before the entity came again. This time the entire family and the babysitter saw the specter just long enough to turn them all white with fear and send them fleeing into the night.
After the Tallman's left their home, the house became a local sensation and lines wrapped around the neighborhood with curious spectators hoping to catch a glimpse of some random terror. Many spectators claimed to have been successful in their desires. Many claimed to see snow blowers running up and down the driveway by themselves and furniture being flung around inside the house. Of course, none of these stories have ever been confirmed, but the stories themselves turned the Tallman house into a local legend that grew with time. Stories of the house being a gateway to hell and blood dripping from the ceilings proliferated and a media frenzy swept incidents out of control.

Despite this, and despite accusations that it was a hoax on the Tallman's part, the Tallman's have shown nothing but the desire to stay out of the spot light. They've turned down interviews and even rejected Oprah when she invited them to be her guest. They seem happiest forgetting the horror on Larrabee street.
Email Post

Pale said…
Interesting. I hadn't heard about that one, although my husband is from WI originally and my parents and my inlaws live there now.

John is an expert in cases like this. As to the lack of history, the previous residents could have been into occult practices which led to possession/infestation of the property. "History" can predate the current building and be attached to the land instead. Zaffis also claims that dabbling in the occult -- even what may seem like uneventful, inert experiences with ouija -- can come back to haunt you at ~any~ time, even years after the fact. After you've forgotten about it. And that these things tend to occur when you are most vulnerable.

This will sound like silliness, like the power of suggestion, but I only got about halfway through Zaffis' book. I had to stop reading it because of some minor disturbances around my house ... including my two year old seeing monsters in the windows at night. I am not prone to being squeamish. My very good friend who passed away about two years ago was a medium that dealt with negative entities and I soaked up a lot of info from him, most especially about protection. The owners are wise to distance themselves from rehashing the story. Once this kind of thing happens, you remain vulnerable to repeating it.
July 24, 2010 at 12:56 PM

Pam Morris said…
wow...that story gives me chills...I'm not sure if it's the 'ordinariness' of the family and the house or the fact that they really don't want to talk about it all anymore...another one I don't think I would venture into.
July 24, 2010 at 2:35 PM

Anonymous said…
was this story on "A Haunting" it sounds familiar. very scary stuff when you're dealing with malevolent entities.
July 25, 2010 at 10:09 AM