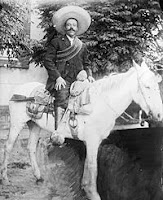 Its amazing how many stories can be taken from one drunken night.  The lights dim, the beer flows, and people talk about things they would never discuss in daylight hours.   People whisper of old traumas and secrets so long buried they had almost forgotten they existed themselves.  Of course,  remembering such wonderful stories when you've drank too much yourself is a bit of a feat.   This story was wonderful, but it may be a bit blurry around the edges because I had too good of a time.  So,  if you happen to have been at the party in question and remember this tale better than me, please let me know.  I did the best I could recalling all the events through the muddy haze of my dimmed mind.

A gentleman at the gathering I was at leaned over the table to tell me that he believed in ghosts.  He said that his wife drew them to her and that since he had been married to her he had seen things.  He didn't want to call them ghosts, because he was uncomfortable admitting it, but he had seen things.  Things were around her and with her and he could sense them.   He said that his wife's grandmother told a story.  She said that her father had fought with Pancho Villa and had saved his life.  Pancho Villa promised to return the favor.

I'm not as up on my Mexican history as I should be so I gathered a little information on Pancho Villa.    Villa was one of the most prominent Mexican Revolutionary Generals and was in prominence from 1910-1920.  He became a Mexican hero.  Villa and his men took hacienda land from the rich and gave it to peasants and soldiers. He robbed and commandeered trains and printed fiat money to pay for his cause.  He was made Governor of Chihuahua from 1913-1914 and retired in 1920.  He was assassinated in 1923 after he tried to go back to politics.

According to my gentleman narrator,  Villa was never able to return the favor in life, so he kept it in the after life and every member of his wife's family since has felt his presence from time to time watching over them.  I was able to speak to the gentleman's wife as well.  She was much more sober and admitted the story was true but didn't want to go into much detail.  She just said that she's always known he was there from time to time.  She also knows when other spirits and ghosts are present.  She doesn't speak of it often, but it is part of her daily life.   Villa stays with her and her family and may stay with her children, watching out for them and waiting to repay his debt.
Email Post

Julie Ferguson said…
It's funny but when I tell people that I am interested in the paranormal, they always seem to have a ghost story. I'm sure living with a ghost magnet would make life less boring, lol.
July 9, 2010 at 3:23 PM