Book Review: The Little Book of Curses and Maledictions for Everyday Use 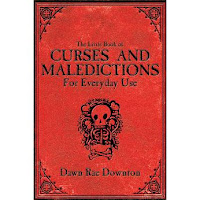 Curse aren't exactly ghost stories, but their black shadow can hang over many people's lives and spread outwards leaving ghosts behind them.   They dip into the paranormal and remind us that there are many things beyond our control.  They whisper of dark forces and remind us to be very careful who we piss off.  For all these reasons, I couldn't resist this little book.

Dawn Rae Downton's book of curses is fabulous, not so much because I practice witch craft and curse those that give me the stink eye in my spare time, but because it presents old curses and spells like other books present recipes.  It lays them out with an ingredient and instruction list,  all it lacks are the colorful photos of the finished project (cursed man with warts all over his face perhaps?)  It wraps these recipes in colorful jokes and stories that make this a fun bathroom book for anyone whose ever dreamt of getting back at their boss or finding a way to get back at their ex-husband.  It uses wisdom from the Simpsons  such as "revenge is a dish best served three times."  It also lists some of the most famous curses.

My favorite curse in this book is the superman curse.  Apparently,  the  2006 Superman almost didn't get made because of this curse.  Every actor offered the role turned it down.  Problems plagued it from the beginning.  Similar problems have plagued every production of  Superman from the beginning.  From Margot Kidder's nervous breakdown, to Marlon Brando's daughter's suicide, to George Reeves untimely death.  Every Superman ride ever made has broken.  The Ride of Steel in Massachusetts failed injuring several riders.  Who set this terrible curse is motion?  They say the pair who created the comic book character and 1938 cursed Superman after they were swindled out of the rights for $130.

So if you are looking for a recipe for revenge or you just have a wicked sense of humor,  you might want to sneak a peak at The Little Book of Curses and Maledictions for Everyday Use.
Email Post
Labels: black magic Book Reviews Curses Dawn Rae Downton Spells

Unknown said…
This sounds like a really fun book! Thanks for the post. I will have to go find this :)

Heart Centered Psychic said…
Oh no. I am in some serious trouble. On my recent summer vacation; which I blogged this morning? I mentioned giving the stink eye and more.

Jessica Penot said…
After reading this, I am much more reserved in my stink eye use. I hope whoever you gave the stink eye to didn't read this book.
July 8, 2010 at 12:20 PM