As I drift into summer,  I find my focus drifting too.   Books are always my favorite part of summer.  Sitting by the pool or at the beach with a good book makes the rest of the year seem less cold.  Here are some of my recent favorites.  Some of these are ghost stories, others real stories of deadly serial killers, and some just silly.

The Devil in the White City   This is a gorgeous book.   It tells three stories that run parallel to each other in Chicago history.   The first story is the story of the shocking disturbing serial killer H.H. Holmes.  He was Jack the Ripper's contemporary and he was twice as evil as Jack.  In fact,  he makes Hanible Lector look like a pussy cat.  H.H. Holmes was real and some say he killed as many as 200 people with a cruel efficiency.  He built a hotel, a castle, designed for no other purpose than to harvest, kill, and dispose of his human victims.   He kills women and children with cold blood lust and manages to use the times to avoid capture completely until he is caught perpetrating a life insurance scam.  His story is juxtaposed with the building of the 1893 Chicago World Fair that brought together the greatest artistic and scientific minds of the time to create a city of transient and unsurpassed beauty.  Within this city,  alternating current was established as the norm, the Ferris wheel was invented, shredded wheat was introduced,  and the first electric chair was seen.  The third story is the story of an unimportant madman who's psychotic tendencies bring a dark close to the brilliance of the white city.  It is a great read and made me love Chicago all the more. 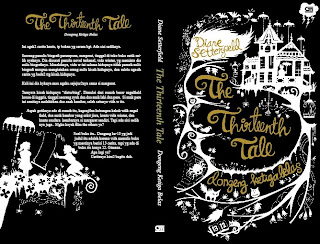 The Thirteenth Tale  This is the story of a mysterious writer who has made up twelve stories about her life.  None of these stories are the same.  One final writer goes to capture the thirteenth tale of this mysterious writer and finds the story laced was ghosts, fires, and strangeness that could only be true.    This haunting gothic story is ghostly and just captivating enough to make it perfect summer read.

Divine Misfortune  This a a very silly story of a world where gods are bought like old bikes on Craig's List.    A delightful couple finally decide to commit to a god.  They  find their god on an Internet site.  His name is Lucky and he is the raccoon god of luck.   From the bizarre to the hilarious this story turns gods and religion into a good laugh for those days that really need them.

Pride and Prejudice and Zombies  This book is essentially just Pride and Prejudice.  If you love Jane Austin, you'll probably like this book.  Jane Austen has just been made a little bit more exciting by the addition of zombies.   I really can't say to much more, except that it was surprisingly fluid and engaging.   It is a definite way to make you summer just a little bit more fun.

Will Errickson said…
Nice. I was just thinking of Devil in the White City, too. Sounds great. I truly enjoy a brisk chilling tale in the brutal heat of summer.
June 11, 2010 at 8:28 AM

Cullan Hudson said…
There's a sequel to Pride... It's about Abe Lincoln as a vampire hunter. http://strangestate.blogspot.com/2010/06/summer-reads.html

I also find it cool that we both wrote about Devil in the White City: http://strangestate.blogspot.com/2008/09/supernatural-surrounded-serial-killer.html
July 4, 2010 at 6:48 AM

Courtney Mroch said…
FUN! I have had the Pride and Prejudice one in my queue for months now. I keep hoping to get to it but...nothing. And the rest of them all sound like ones I'd like to add to my queue too. Thanks!
July 18, 2010 at 9:53 PM

Melancholy and Menace said…
I'm reading The Thirteenth Tale at the moment. It's a truly good read.

Devil in the White City may just be my next purchase.