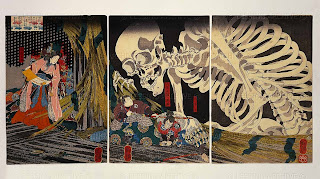 The Japanese know how to tell a ghost story. When there is a shortage of American horror stories,  all we need to do is borrow a premise from Japan to come up with the next "The Ring" or "The Grudge"   Reading back over Japan's history and folklore it is easy to see why they are so adept at fashioning such terrifying stories.  Their history is thick with them.   Princess Takiyasha's story is one of the better known Japanese ghost stories. Princess Takiyasha's was a tenth century Japanese princess.  She was the daughter of the provincial warlord Taira no Masakado who tried to set up an 'Eastern Court' in Shimōsa Province in competition with the emperor in Kyoto.  After her father's death,  the princess continued living in her father's ruined palace and planned to continue fighting against her father's enemies.  According to legend, in order to help her defeat her father's enemies,  the princess enlisted an army of ghosts to help her bring her foes to their knees.

The princess became a nun after her father's death, but she and her brother met the spirit of a great ssorcerer who taught them how to use witchcraft to help them destroy their father's rivals.   The princess was able to use this magic to summon an army of ghosts and planned to lay waste to all who opposed her.  However, a great warrior, Mitsukuni,  discovered her plan and her sorcery.  He attacked her and was able to destroy the princess'palace and defeat both the human and  ghostly armies of the fallen princess.  In one last desperate act,  the princess summoned a huge ghost in the form of a skeleton to defeat Mitsukuni.   Before the ghost could gt to Mitsukuni,  he was able to kill the princess' brother and he eventually went on to defeat the ghost and the rebellious princess.

This legendary Japanese story went on to become a popular kabuki play.  It was also immortalized in the painting above.
Email Post
Labels: Ghost Army Princess Takiyasha