Hermitage Castle and the Ghastly Ghosts of William De Solis 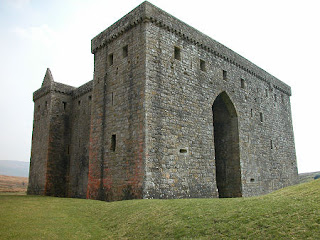 William De Solis is one of the most loathed men in Scottish history.  Historically,  De Solis was the owner of Hermitage castle and sided with the English against the Scottish King Robert the Bruce in the Scottish/English wars.   This was enough to make him despised.    He was also known to be a particularly cruel man and his dark forboding home, Hermitage Castle, added to the general sense of dread that was associated with him.   According to history,  De Solis was rounded up and killed for his association with the English plot.

Legend tells a darker tale that dips enough into the truth of the cruel Baron to make it terrifying.   It was said that the Baron was a practitioner of the dark arts and that he often kidnapped and murdered local children to use in his black rites.  Using his dark powers he summoned a redcap to be his familiar.  Redcaps were proweries or evil goblins that wandered the Scottish countryside killing travelers and putting their blood on their heads, making a cap of blood for themselves.    De Solis's redcap was Redcap Sly.   De Solis's reign of terror came to an end when he tried to kidnap a local young woman and drag her up to Hermitage Castle.   He was stopped and killed those that stopped him later.   Rumor of De Solis's blood lust spread to Robert the Bruce, who ordered him boiled alive.

The locals had to consult a wizard to dispatch of De Solis, because of his evergrowing supernatural powers.  It was said that the only way De Solis could be killed was with a rope of sand.   The wizard helped the locals forge a three fold rope of lead with sand inside to bind the warlock and then he was boiled alive.   Hermitage Castle is said to be one of the most haunted castles in Scotland.  It is said that De Solis's dark deeds, wether magical or natural,  have left a residue of evil over the dark and lonely castle. Visitors to the castle report hearing screams echoing  throught the stone halls of the castle.  They say De Solis's victim's screams never sleep.   Others say that Redcap sly still lingers in the shadows of the castle, waiting for lost travellers.
Email Post
Labels: Hermitage Castle Scottish Ghosts

Pam Morris said…
we vacationed in Scotland years ago and I don't remember hearing about this castle! something else I missed out on...what a fascinating story behind it...gruesome, to be sure!
by the way, really like the new look of your blog!
June 19, 2010 at 11:54 AM

Unknown said…
Wow! Boiled alive. That would be an unbelievably painful and gruesome way to go! CREEPY.

laughingwolf said…
de solis had to be french, though born in scotland... not to say scots were all angels

Jessica Penot said…
Hey,,,, the poor French. They were all angels too (lol). I think there was a strong connection between France and Scotland at this time. Both nations were Catholic and both fought England so De Solis could have had French in him.
June 20, 2010 at 8:38 AM